USD/JPY pulls back from a fresh monthly high (135.58) to largely track the recent weakness in US Treasury yields, and the exchange rate may face a larger pullback ahead of the update to the US Consumer Price Index (CPI) as it struggles to hold above the 50-Day SMA (134.99).

USD/JPY initiates a series of higher highs and lows as it carves a bullish outside day candle following the US Non-Farm Payrolls (NFP) report, and the ongoing improvement in the labor market along with evidence of sticky inflation may keep the Greenback afloat as it puts pressure on the Federal Reserve to carry out a highly restrictive policy.

Looking ahead, another uptick in the core US CPI may largely influence USD/JPY even though the headline reading is expected to narrow to 8.7% from 9.1% per annum in June as the Federal Open Market Committee (FOMC) acknowledges that “price pressures are evident across a broad range of goods and services.”

As a result, USD/JPY may continue to retrace the decline from the yearly high (139.39) with the FOMC on track to implement higher interest rates in September, and the exchange rate may exhibit a bullish trend throughout the remainder of the year as the Bank of Japan (BoJ) remains reluctant to switch gears.

In turn, USD/JPY may continue to track the positive slope in the 50-Day SMA (134.99) as it reverses course ahead of the June low (128.60), while the tilt in retail sentiment looks poised to persist as traders have been net-short the pair for most of the year. 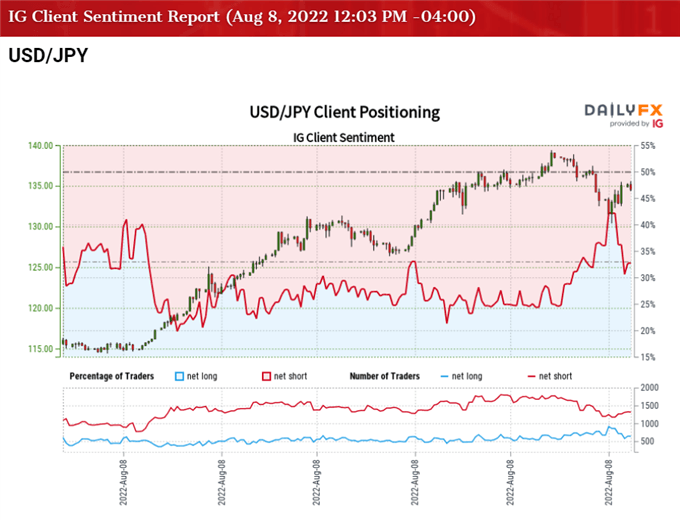 The IG Client Sentiment report shows 32.87% of traders are currently net-long USD/JPY, with the ratio of traders short to long standing at 2.04 to 1.

The number of traders net-long is 2.72% higher than yesterday and 17.20% lower from last week, while the number of traders net-short is 3.35% higher than yesterday and 5.80% higher from last week. The decline in net-long interest has fueled the crowding behavior as 44.45% of traders were net-long USD/JPY last week, while the rise in net-short position comes as the exchange rate pulls back from a fresh monthly high (135.58).

With that said, the update to the US CPI may keep USD/JPY afloat if the core reading points to sticky inflation, but the exchange rate may face a larger pullback ahead of the data print as it struggles to hold above the 50-Day SMA (134.99). 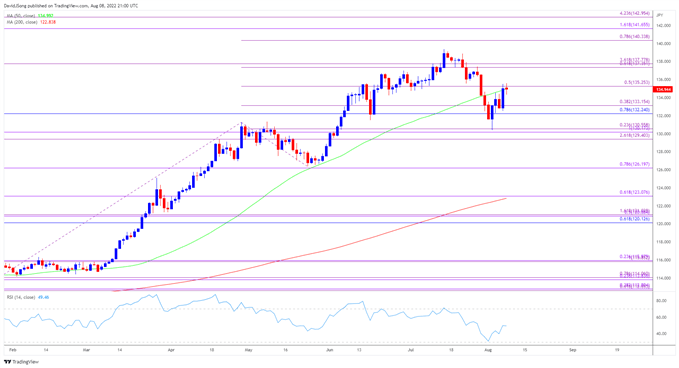