USD/JPY retraces the decline from earlier this week to track the rebound in longer-dated Treasury yields, and fresh developments coming out of the US may fuel the recent advance in the exchange rate as the Non-Farm Payrolls (NFP) report is anticipated to show a further improvement in the labor market.

USD/JPY approaches the weekly high (115.78) as Federal Reserve Chairman Jerome Powell tells US lawmakers that “the process of removing policy accommodation in current circumstances will involve both increases in the target range of the federal funds rate and reduction in the size of the Federal Reserve's balance sheet,” with the central bank head going onto say that “reducing our balance sheet will commence after the process of raising interest rates has begun.”

The comments suggest the Russia-Ukraine crisis will do little to derail the Federal Open Market Committee (FOMC) from normalizing monetary policy as Chairman Powell pledges to be nimble in responding to incoming data and the evolving outlook, and it remains to be seen if the central bank will adjust its exit strategy as the NFP report is anticipated to show the economy adding 400K jobs in February.

At the same time, the Unemployment Rate is expected to narrow to 3.9% from 4.0% during the same period, and a positive development may trigger a bullish reaction in the US Dollar as it puts pressure on the FOMC to adopt a more rapid approach in normalizing monetary policy.

In turn, USD/JPY may stage further attempts to breakout of the opening range for 2022 as the Bank of Japan (BoJ) remains in no rush to switch gears, and the deviating paths between the two central banks may continue to coincide with the crowing behavior seen in late-2021 as the recent flip in retail sentiment was short lived. 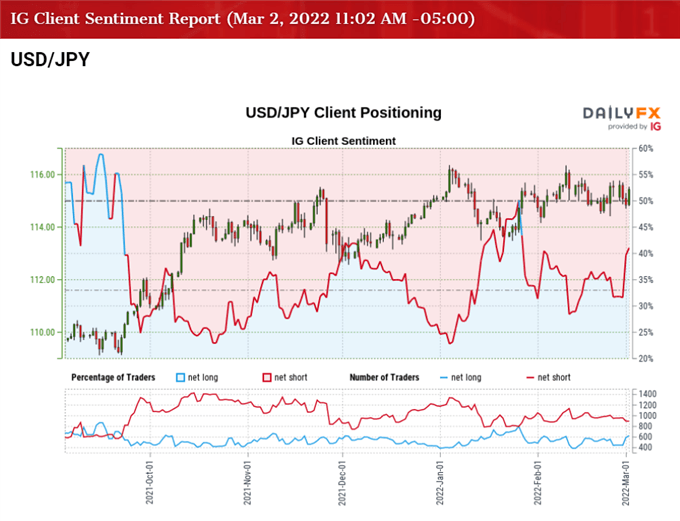 The IG Client Sentiment report shows 39.04% of traders are currently net-long USD/JPY, with the ratio of traders short to long standing at 1.56 to 1.

The number of traders net-long is 8.85% lower than yesterday and 1.54% lower from last week, while the number of traders net-short is 2.50% higher than yesterday and 8.43% lower from last week. The decline in net-long position comes as USD/JPY retraces the decline from earlier this week, while the drop in net-short interest has helped to alleviate the crowding behavior as 35.95% of traders were net-long the pair last week.

With that said, the NFP report may push USD/JPY towards the weekly high (115.78) as the update is anticipated to show a further improvement in the labor market, and the exchange rate may stage another attempt to break out of the opening range for 2022 as market participants brace for higher US interest rates. 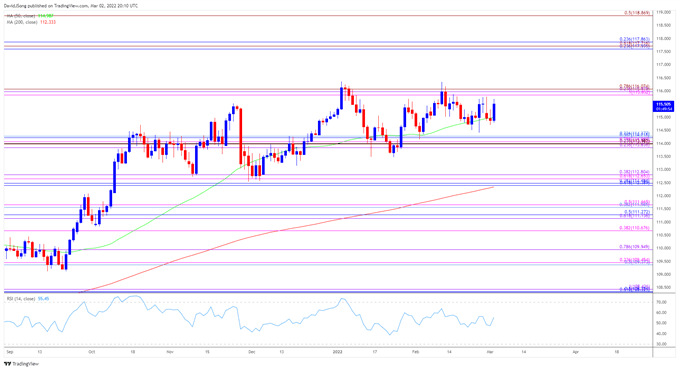