EUR/USD remains under pressure following the kneejerk reaction to the weaker-than-expected US Non-Farm Payrolls (NFP) report, and looming developments in the Relative Strength Index (RSI) may indicate a further decline in the exchange rate if the oscillator slips below 30 to push into oversold territory.

EUR/USD seems due for a pickup in volatility as USD/JPY trades at its highest level since 2018, and it remains to be seen if key developments coming out of the US will influence the exchange rate as the European Central Bank (ECB) continues to brace for a transitory rise in inflation.

The account of the ECB’s September meeting suggests the Governing Council is in no rush to switch gears as the central bank insists that “the current increase in inflation was expected to be largely temporary,” and it seems as though President Christine Lagarde and Co. will retain the current course for monetary policy as “there remained some way to go before the damage to the economy caused by the pandemic was overcome.”

As a result, the Euro may continue to underperform against its US counterpart as “the inflation outlook remained some way from the ECB’s target level,” and the Federal Open Market Committee (FOMC) Minutes may keep EUR/USD under pressure as the central bank reveals a tentative exit strategy in tapering its purchases of Treasury securities and mortgage-backed securities (MBS).

Ahead of then, the update to the US Consumer Price Index (CPI) may generate a bullish reaction in the US Dollar as both the headline and core rate of inflation are anticipated to hold steady in September, but an unexpected slowdown in price growth may spur a near-term rebound in EUR/USD as it would provide the FOMC with greater flexibility in taking a gradual approach to normalizing monetary policy.

In turn, EUR/USD may face increased volatility ahead of the next FOMC interest rate decision on November 3 as Chairman Jerome Powell and Co. prepare to switch gears, but a further depreciation in the exchange rate may fuel the tilt in retail sentiment like the behavior seen earlier this year. 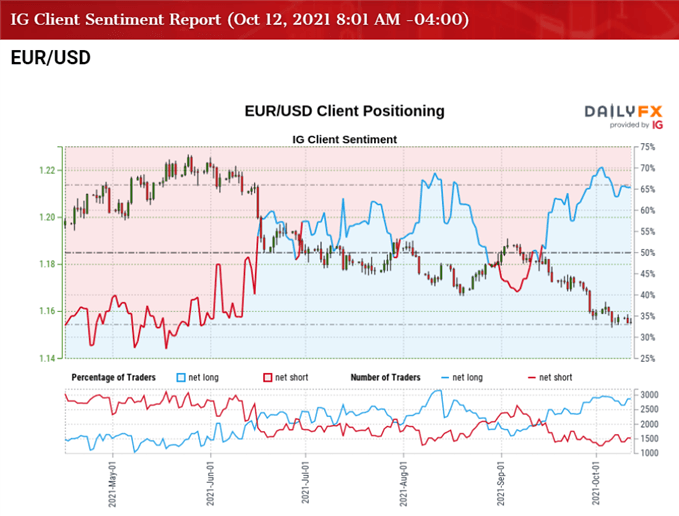 The IG Client Sentiment report shows 63.01% of traders are currently net-long EUR/USD, with the ratio of traders long to short standing at 1.70 to 1.

With that said, EUR/USD may continue to trade to fresh yearly lows throughout the second half of 2021 amid the deviating paths between the ECB and FOMC, and the looming developments in the Relative Strength Index (RSI) may show the bearish momentum gathering pace if the oscillator slips below 30 to push into oversold territory.