USD/CAD has taken out the August low (1.2453) following the better-than-expected Canada Employment report, but key developments coming out of the US may curb the recent decline in the exchange rate as signs of sticky inflation may put pressure on the Federal Reserve to normalize monetary policy sooner rather than later

USD/CAD extends the series of lower highs and lows from last week as Canada’s labor market returns to pre-pandemic levels, with the economy adding 157.1K jobs in September, which helped to push the Unemployment Rate to 6.9% from 7.1% in August.

According to Statistics Canada, “the labour force participation rate was 65.5% in September, matching the rate observed in February 2020,” and signs of a robust recovery may encourage the Bank of Canada (BoC) to adjust the forward guidance for monetary policy as officials “expect the economy to strengthen in the second half of 2021.” As a result, the Canadian Dollar may continue to outperform its US counterpart ahead of the next BoC interest rate decision on October 27 as Governor Tiff Macklem and Co. pledge to “provide the appropriate degree of monetary policy stimulus to support the recovery and achieve the inflation objective,” but key developments coming out of the US may prop up USD/CAD as the Federal Reserve appears to be on track to switch gears later this year.

Signs of sticky inflation may put pressure on the Federal Open Market Committee (FOMC) to normalize monetary policy sooner rather than later as both the headline and core Consumer Price Index (CPI) are anticipated to hold steady in September, and the weaker-than-expected Non-Farm Payrolls (NFP) report may do little to derail the central bank from scaling back monetary support as “bottleneck effects have been larger and longer lasting than anticipated, leading to upward revisions to participants inflation projections for this year.”

In turn, the FOMC Minutes may generate a bullish reaction in the US Dollar as Chairman Jerome Powell and Co. lay out a tentative exit strategy, but a further decline in USD/CAD may fuel the tilt in retail sentiment like the behavior seen earlier this year. 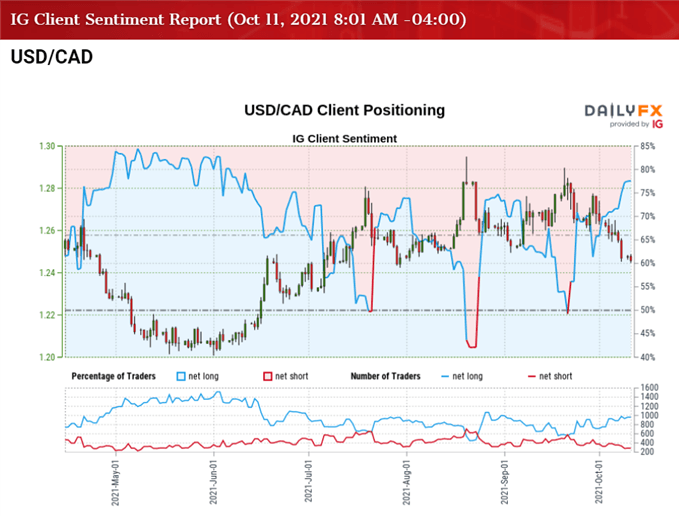 The IG Client Sentiment report shows 74.35% of traders are currently net-long USD/CAD with the ratio of traders long to short standing at 2.90 to 1.

The number of traders net-long is 3.42% higher than yesterday and 14.07% higher from last week, while the number of traders net-short is 25.55% higher than yesterday and 7.28% lower from last week. The rise in net-long position has fueled the crowding behavior as 47.19% of traders were net-long USD/CAD during the last full week of September, while the decline in net-short position comes as the exchange rate trades to a fresh monthly low (1.2446).

With that said, USD/CAD may face a larger correction following the failed attempt to test the yearly high (1.2949) as it takes out the August low (1.2453), but signs of sticky inflation in the US may generate a bullish reaction in the Greenback as it fuels speculation for an imminent shift in Fed policy.