NZD/USD slips to a fresh monthly low (0.7006) as it extends the series of lower highs and lows from last week, and the exchange rate may continue to give back the rebound from the yearly low (0.6805) as the bull flag formation from earlier this month unravels.

NZD/USD snaps the opening range for September as concerns surrounding Evergrande drag on investor confidence, and a further deterioration in risk appetite may lead to a further decline in the exchange rate as the US Dollar benefits from the flight to safety.

As a result, the US Dollar may continue to outperform its New Zealand counterpart ahead of the Federal Reserve interest rate decision on tap for later this week, and fresh developments coming out of the central bank may keep NZD/USD under pressure if Chairman Jerome Powell and Co. deliver a tentative exit strategy.

Plans to scale back monetary support should prop up the Greenback as Fed officials forecast two rate hikes for 2023, but a more bullish scenario may materialize for the US Dollar if the update to the Summary of Economic Projections (SEP) reflect a steeper path for the federal funds rate.

In turn, NZD/USD may continue to give back the rebound from the yearly low (0.6805) as the bull flag formation from earlier this month failed to transpire, but a further decline in the exchange rate continue to alleviate the tilt in retail sentiment like the behavior seen earlier this year. 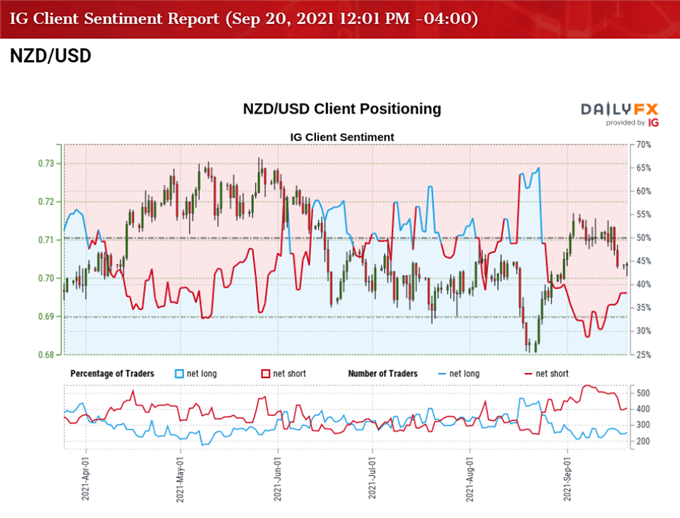 The IG Client Sentiment report shows 40.51% of traders are currently net-long NZD/USD, with the ratio of traders short to long standing at 1.47 to 1.

With that said, the advance from the August low (0.6805) may turn out to be a correction in the broader trend as NZD/USD trades to fresh yearly lows in the second half of 2021, and the Fed rate decision may undermine the recent recovery in the exchange rate if the central bank shows a greater willingness to normalize monetary policy sooner rather than later.