EUR/USD extends the series of lower highs and lows from the previous week as European Central Bank (ECB) officials defend the dovish forward guidance for monetary policy, and the exchange rate appears to be on track to test the yearly low (1.1664) following failed attempt to clear the July high (1.1909).

EUR/USD is on pace to mark a three day losing streak for the second time this month as the ECB tames speculation for a shift in monetary policy, with Governing Council Isabel Schnabel pledging to “act more patiently” as the central bank struggles to achieve its one and only mandate for price stability.

In a recent speech, Schnabel insists that the ECB needs “to see clearer signs that inflation is reliably moving towards our 2% target” before the central bank switches gears as “inflation is still expected to be below our 2% target in the medium term.” As a result, Schnabel argues that the non-standard tools “will remain crucial in the time to come, paving the way out of the pandemic and towards reaching our inflation target,” and the comments suggest the ECB is in no rush to normalize monetary policy “given the remaining uncertainty regarding the pandemic and the economic and inflation outlook.”

In turn, EUR/USD may remain under pressure ahead of the Federal Reserve interest rate decision on September 22 as Chairman Jerome Powell and Co. appear to be on track to deliver an exit strategy, but a further decline in the exchange rate may fuel the recent flip in retail sentiment like the behavior seen earlier this year. 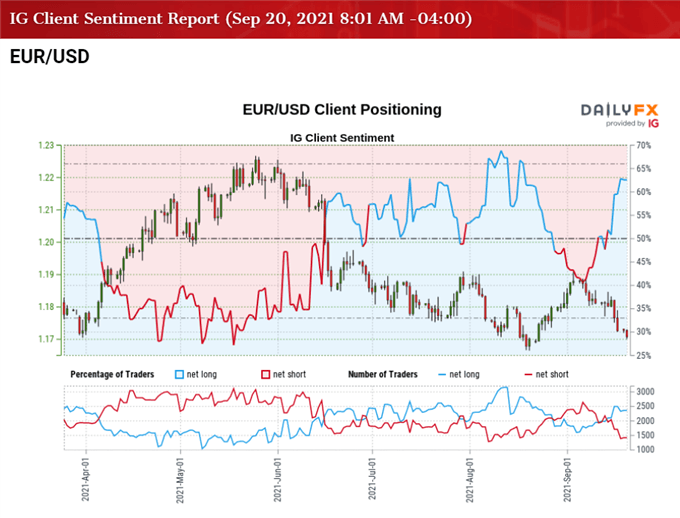 The IG Client Sentiment report shows 61.27% of traders are currently net-long EUR/USD, with the ratio of traders long to short standing at 1.58 to 1.

With that said, the rebound from the August low (1.1664) may turn out to be a correction in the broader trend as the exchange rate trades to fresh yearly lows in the second half of 2021, and the Federal Open Market Committee (FOMC) rate decision may the exchange rate under pressure if the central bank starts to taper its purchases of Treasury securities and mortgage backed securities (MBS).