EUR/USD fails to defend the 2021 range as it takes out the March low (1.1704), and the exchange rate may continue to trade to fresh yearly lows ahead of the Kansas City Fed Economic Symposium scheduled for August 26 – 28 as it extends the series of lower highs and lows from the start of the week.

EUR/USD gives back the bullish reaction to the Federal Open Market Committee (FOMC) Minutes on the back of US Dollar strength, and speculation for a looming change in Fed policy may keep the exchange rate under pressure as the European Central Bank (ECB) appears to be on a preset course.

In a recent blog post on the ECB’s website, Chief Economist Philip Lane emphasizes that “a commitment to maintain monetary accommodation on a persistent basis is essential in view of the effective lower bound constraint and the shortfall in the medium-term inflation outlook relative to the two per cent target,” with the official largely defending the dovish forward guidance for monetary policy as the Governing Council stands “ready to adjust all of our instruments, as appropriate, to ensure that inflation stabilises at our two per cent target over the medium term.”

The comments suggest the ECB will stick to the same script at its next interest rate decision on September 9 as the central bank braces for a transitory rise in inflation, and the deviating paths for monetary policy may keep EUR/USD under pressure as a growing number of Federal Reserve officials show a greater willingness to switch gears.

In turn, failure to defend the 2021 range may continue to push EUR/USD to fresh yearly lows amid growing bets for an imminent shift in Fed policy, but a further decline in the exchange rate may fuel the crowing behavior in retail sentiment like the behavior seen earlier this year. 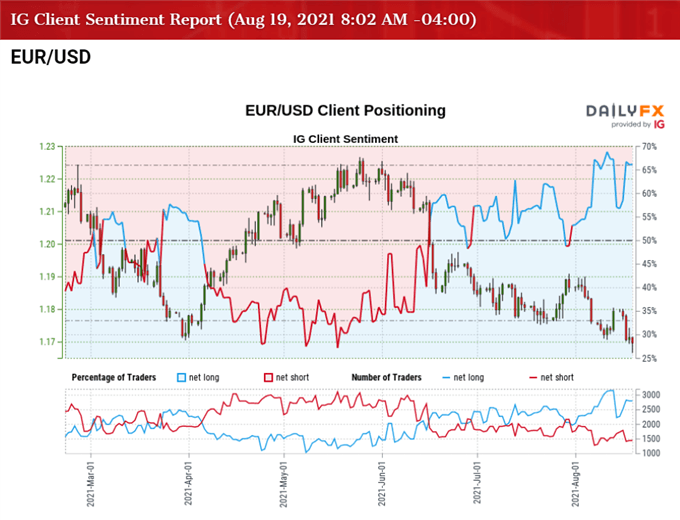 The IG Client Sentiment report shows 62.33% of traders are currently net-long EUR/USD, with the ratio of traders long to short standing at 1.65 to 1.

The number of traders net-long is 12.15% lower than yesterday and 19.24% lower from last week, while the number of traders net-short is 3.52% higher than yesterday and 2.78% higher from last week. The decline in net-long position comes as EUR/USD has helped to alleviate the crowding behavior as 67.80% of traders were net-long EUR/USD last week, while the rise in net-short position comes as the exchange rate trades to a fresh yearly low (1.1666).

With that said, the break of the March low (1.1704) instills a bearish outlook for EUR/USD ahead of the Fed symposium on tap for later this month, and the exchange rate may continue to trade to fresh yearly lows as it extends the series of lower highs and lows from the start of the week.