AUD/USD appears to be making another attempt to test the March high (0.7849) ahead of the update to Australia’s Consumer Price Index (CPI), and the exchange rate may stay on track to negate the head-and-shoulders formation from earlier this year after failing to close below the neckline.

AUD/USD has come up against the monthly high (0.7816) on the back of US Dollar weakness, and fresh data prints coming out of Australia may keep the exchange rate afloat as the headline reading for inflation is projected to increase for the third consecutive quarter.

Australia’s CPI is expected to widen to 1.4% from 0.9% during the last three-months of 2020 to mark the highest reading since the onset of COVID-19, and the development may put pressure on the Reserve Bank of Australia (RBA) to gradually adjust the forward guidance for monetary policy as the economy returns to pre-pandemic conditions.

Looking ahead, the RBA may have limited scope to further utilize its non-standard tools as “the Bank was projected to own 30 per cent of the AGS (Australian Government Securities) market and 15 per cent of the semis (bonds issued by the states and territories) market” after completing the second round its quantitative easing (QE) program in September, but the minutes from the March meeting suggest the central bank is in no rush to scale back its emergency measures as “annual CPI inflation was expected to rise temporarily to around 3 per cent around the middle of the year as a result of the reversal of some pandemic-related price reductions.”

In turn, the RBA appears to be on track to retain the current course for monetary policy at the next meeting on May 4 even though “the economic recovery was expected to continue, with above-trend growth forecast in 2021 and 2022,” and it remains to be seen if the decline from the February high (0.8007) will end up being a correction in the broader trend or a change in AUD/USD behavior as the exchange rate looks poised to negate the head-and-shoulders from earlier this year following the failed attempt to close below the neckline. 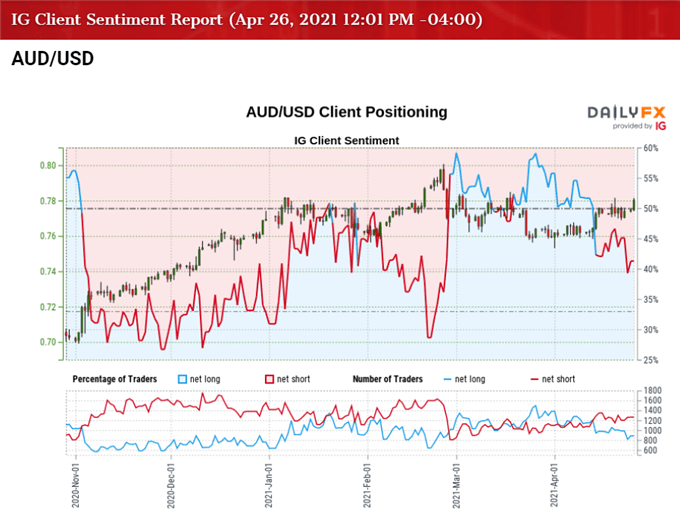 At the same time, the recent flip in retail sentiment continues to largely mimic the activity seen in 2020, with the IG Client Sentiment report showing 40.65% of traders currently net-long AUD/USD as the ratio of traders short to long stands at 1.46 to 1.

The number of traders net-long is 16.91% higher than yesterday and 3.64% lower from last week, while the number of traders net-short is 10.38% higher than yesterday and 9.25% higher from last week. The decline in net-long position could be a function of profit taking behavior as AUD/USD comes up against the monthly high (0.7816), while the rise in net-short interest has fueled the tilt in retail sentiment as 43.33% of traders were net-long the pair during the previous week.

With that said, AUD/USD may make further attempts to test the March high (0.7849) as the crowding behavior from 2020 resurfaces, and the exchange rate may ultimately negate the head-and-shoulders formation from earlier this year after failing to close below the neckline.