NZD/USD attempts to negate a head-and-shoulders formation after defending the March low (0.6943), and the exchange rate may continue to retrace the decline from the previous month as it climbs back above the neckline.

NZD/USD approaches the 50-Day SMA (0.7155) as the Reserve Bank of New Zealand (RBNZ) retains the current course for monetary policy, and the exchange rate may continue to push to fresh monthly highs as it breaks out of the range bound price action carried over from the previous week.

Meanwhile, the RBNZ’s appears to be on a preset course even though “the Committee agreed that it was prepared to lower the Official Cash Rate (OCR) if required” as the central bank reiterates that the “risks to the economic outlook remain balanced.”

It seems s thought the RBNZ will continue to rely on its current set of tools to achieve its policy targets as the central bank plans to “not remove monetary stimulus until it had confidence that it is sustainably achieving the consumer price inflation and employment objectives,” and it remains to be seen if Governor Adrian Orr and Co. will adjust the forward guidance at the next meeting on May 26 as officials see “a risk that higher headline inflation, if sustained, may feed into higher inflationary expectations.”

Until then, NZD/USD may continue to track the March range as it attempts to negate a head-and-shoulders formation, and the decline from the yearly high (0.7465) may turn out to be a correction in the broader trend rather than a key reversal as the crowding behavior from 2020 resurfaces. 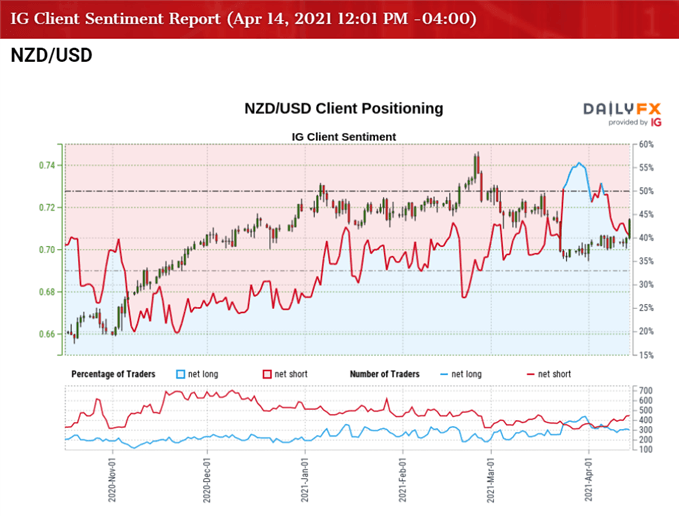 The recent flip in retail sentiment continues to dissipate as the IG Client Sentiment report shows 40.84% of traders currently net-long NZD/USD with the ratio of traders short to long standing at 1.45 to 1.

The number of traders net-long is 7.82% lower than yesterday and 9.58% lower from last week, while the number of traders net-short is 10.28% lower than yesterday and 5.67% higher from last week. The decline in net-long position could be a function of profit-taking behavior as NZD/USD trades to a fresh monthly high (0.7150), while the rise in net-short interest has fueled the renewed tilt in retail sentiment as 42.73% of traders were net-long the pair during the previous week.

With that said, the decline from the yearly high (0.7465) may turn out to be a correction in the broader trend rather than a key reversal as the crowding behavior from 2020 resurfaces, and NZD/USD may negate the head-and-shoulders formation from earlier this year as the exchange rate climbs back above the neckline.