NZD/USDattempts to retrace the decline from the start of the week as the US Dollar weakens on the back of improving investor confidence, but failure to preserve the monthly opening range may lead to a larger correction in the exchange rate amid the ongoing rise in longer-dated Treasury yields.

The recent series of lower highs and lows in NZD/USD appears to be unraveling as it bounces back from a fresh monthly low (0.7146), and a further improvement in risk appetite may generate a larger rebound in the exchange rate as the US Dollar still reflects an inverse relationship with inverse confidence.

However, NZD/USD may face a larger correction ahead of next Federal Reserve interest rate decision on January 27 as the US Dollar Index (DXY) is in bounce mode, and it remains to be seen if the central bank will adjust the forward guidance in 2021 as the minutes from the December meeting reveal that “a couple of participants indicated that they were open to weighting purchases of Treasury securities toward longer maturities.”

The outcome based approach laid out by the Federal Open Market Committee (FOMC) suggests the central bank will rely on its non-standard tools to achieve its policy targets as Vice-Chair Richard Clarida insists that the Fed “will continue to increase our holdings of Treasury securities by at least $80 billion per month and our holdings of agency mortgage-backed securities by at least $40 billion per month until substantial further progress has been made toward our maximum-employment and price-stability goals.”

Looking ahead, Fed officials may change their tone over the coming months as “a number of participants noted that, once such progress had been attained, a gradual tapering of purchases could begin,” but the update to the US Non-Farm Payrolls (NFP) may encourage Chairman Jerome Powell and Co. to retain the current course for monetary policy as the FOMC plans to “achieve inflation moderately above 2 percent for some time so that inflation averages 2 percent over time.”

In turn, key market themes may continue to influence NZD/USD ahead of the Fed’s first meeting for 2021, and it looks as though the tilt in retail sentiment will also persist as the crowding behavior from the first half of 2020 resurfaces. 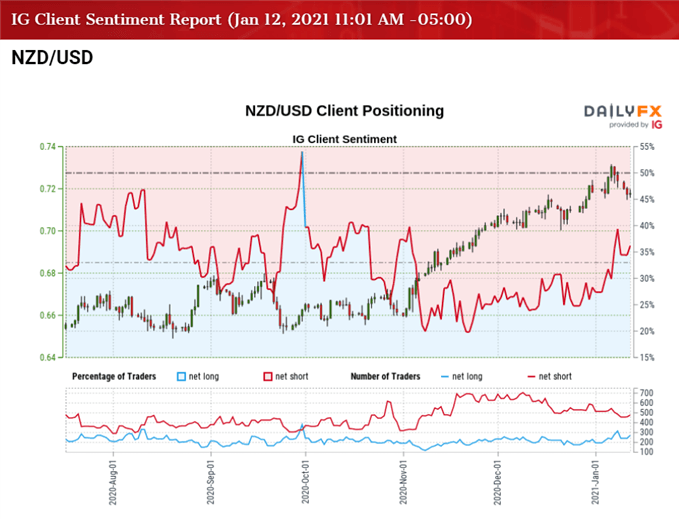 The surge in net-long interest has helped to alleviate the tilt in retail sentiment as only 35.05% of traders were net-long NZD/USD during the previous week, while the recent rise in net-short interest comes as the exchange rate bounces back from a fresh monthly low (0.7146).

With that said, the pullback from the January high (0.7315) may end up being an exhaustion in the broader trend rather than a change in NZD/USD behavior, but failure to preserve the monthly opening range may lead to a larger correction in the exchange rate as the Relative Strength Index (RSI) no longer tracks the upward trend established in the second half of 2020.