NZD/USDcontinues to pullback from the weekly high (0.7315) ahead of the update to the US Non-Farm Payrolls (NFP) report, with the Relative Strength Index (RSI) indicating a textbook sell signal as the oscillator quickly falls back from overbought territory.

NZD/USD snaps the series of higher highs and lows from earlier this week despite the limited reaction to the ISM Non-Manufacturing survey, and key market trends may continue to sway the exchange rate as the US Dollar still reflects an inverse relationship with investor confidence.

Nevertheless, the ISM Non-Manufacturing revealed an unexpected pickup in service-based activity as the index climbed to 57.2 from 55.9 in November, but a deeper look at the report showed the employment component contracting in December, with the figure narrowing to 48.2 from 51.5 the month prior.

The NFP report may highlight a similar dynamic as the update is expected to show the US economy adding 71K jobs in December following the 245K expansion during the previous period, and it remains to be seen if a slowdown in employment will influence the near-term outlook for NZD/USD as the Federal Reserve remains on track to increase its “holdings of Treasury securities by at least $80 billion per month and of agency mortgage-backed securities by at least $40 billion per month.”

Looking ahead, it seems as though the Federal Open Market Committee (FOMC) will retain the current policy at its next interest rate decision on January 27 as the central bank lays out an outcome based approach for monetary policy, and Chairman Jerome Powell and Co. may pay increased attention to the incoming data prints as “various participants noted the importance of the Committee clearly communicating its assessment of actual and expected progress toward its longer-run goals well in advance of the time when it could be judged substantial enough to warrant a change in the pace of purchases.”

Until then, swings in risk appetite may continue to sway NZD/USD as the Fed’s balance sheet sits near the record high, and it looks as though the tilt in retail sentiment will also persist as the crowding behavior from the first half of 2020 resurfaces. 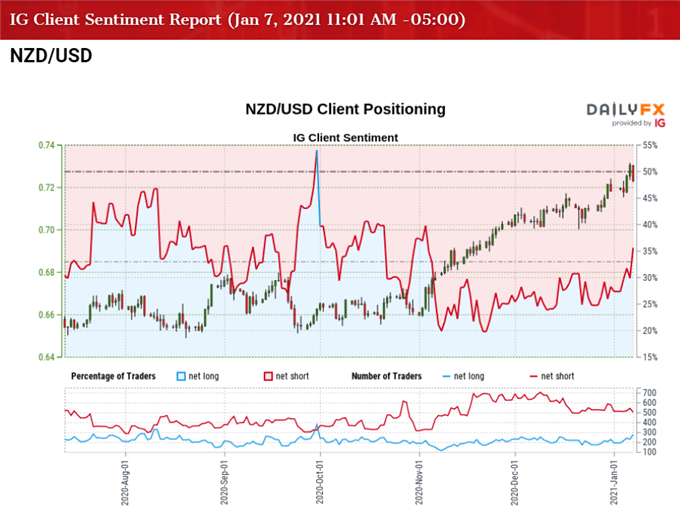 The rise in net-long interest comes as NZD/USD clears the 2020 high (0.7241) during the opening week of January, while the decline in net-short interest has helped to alleviate the crowding behavior as only 30.28% of traders were net-long the pair earlier this week.

With that said, key market themes may continue to sway NZD/USD as the US Dollar still reflects an inverse relationship with investor confidence, but the exchange rate may face a larger pullback as the oscillator quickly falls back from overbought territory and indicates a textbook sell signal.