EUR/USD continues to pullback from the yearly high (1.2011) following the kneejerk reaction to the US Non-Farm Payrolls (NFP) report, but the European Central Bank (ECB) interest rate decision on September 10 may influence the exchange rate if the Governing Council tames speculation for additional monetary support.

EUR/USD approaches the monthly low (1.1781) as ECB Chief Economist Philip Lane warns that the Euro’s “repricing in recent weeks” may hamper the central bank from achieving its inflation mandate, and the Governing Council may continue to endorse a dovish forward guidance as the central bank stands “ready to adjust all of its instruments, as appropriate, to ensure that inflation moved towards its aim in a sustained manner.”

However, it seems as though President Christine Lagarde and Co. are in no rush to deploy more unconventional measures as the European Union (EU) plans to make the EUR 750B Recovery Fund available from 2021 to 2023, and the updated staff projections may indicate a wait-and-see approach for monetary policy as the account of the July meeting emphasizes that the EUR 1.350 trillion envelope for the pandemic emergency purchase programme (PEPP) “should be considered a ceiling rather than a target.”

In turn, the ECB may stick to the same script as board member Isabel Schnabel insists that “there is no reason to adjust the monetary policy stance” while the Euro Area operates near the baseline scenario, and more of the same from the Governing Council may prop up EUR/USD as the Federal Reserve appears to be on track to utilize its emergency tools throughout the remainder of the year.

Until then, EUR/USD may remain under pressure as the Relative Strength Index (RSI) extends the downward trend carried over from the end of July, but the recent weakness may prove to be an exhaustion in the bullish behavior rather than a change in trend as the exchange rate trades to fresh yearly high (0.6789) in September.

In fact, current market trends may continue to influence EUR/USD as the crowding behavior in the US Dollar carries into September, with retail traders net-short the pair since mid-May. 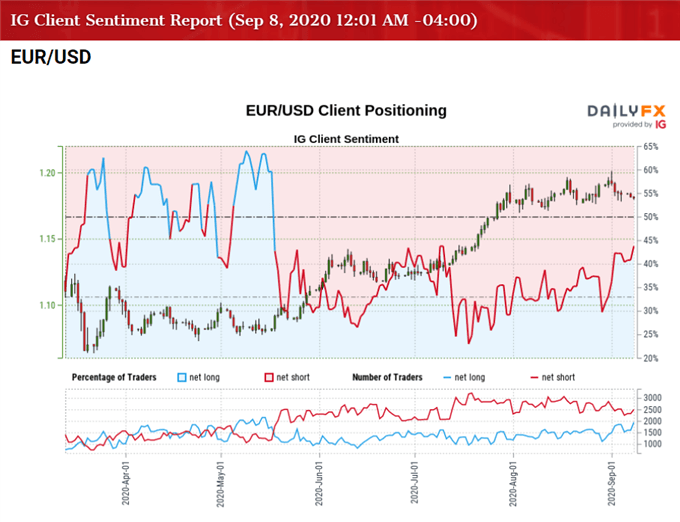 The rise in net-long position has helped to alleviate the tilt in retail sentiment as only 41.63% of traders were net-long EUR/USD last week, but the recent pick up in net-short interest suggests the crowding behavior will persist even though the Federal Reserve’s balance sheet climbs back above $7 trillion in August.

With that said, EUR/USD may face a larger pullback ahead of the ECB meeting as the RSI continues to track a downward trend, but current market trends may keep the exchange rate afloat as it tags a fresh 2020 high (1.2011) in September.