USD/CAD consolidates following the emergency Bank of Canada (BoC) rate cut, and the exchange rate may face range bound conditions over the remainder of the week as it snaps the series of lower highs and lows from the previous week.

USD/CAD attempts to retrace the decline from the monthly high (1.4667) after the BoC reduced the benchmark interest rate for the second time in March, with the central bank announcing a Commercial Paper Purchase Program along with plans to acquire Government of Canada securities in the secondary market.

The unprecedented measures taken by the BoC should help to curb the weakening outlook for growth as the central bank pledges to retain an accommodative stance “until it’s clear the economic recovery is well underway,” and Governor Stephen Poloz and Co. may take additional steps to combat COVID-19 as the “Governing Council stands ready to take further action as required to support the Canadian economy and its financial system.” 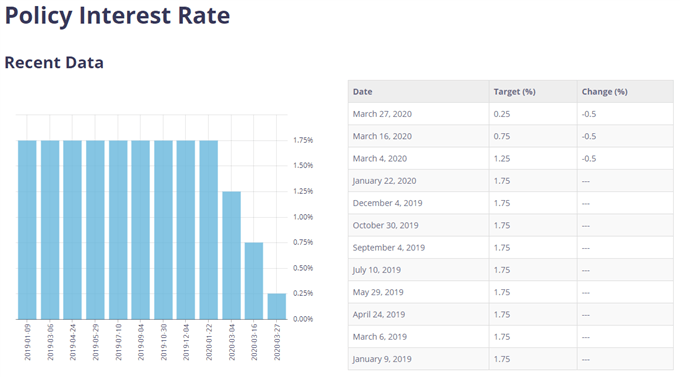 The comments suggest the BoC will rely on its non-standard tools to achieve its dual mandate as the “unscheduled rate decision brings the policy rate to its effective lower bound,” and it remains to be seen if the central bank will continue to push monetary policy into uncharted territory as Governor Poloz and Co. are “closely monitoring economic and financial conditions, in coordination with other G7 central banks and fiscal authorities.”

With that said, the BoC may attempt to buy time at its next policy meeting on April 15, but the dovish forward guidance may keep USD/CAD afloat as the greenback benefits from the flight to safety.

In turn, USD/CAD may continue to exhibit a bullish behavior over the coming days, and the exchange rate may stage another attempt to test the 2016 high (1.4690) as it snaps the series of lower highs and lows from the previous week.