AUD/USD attempts to retrace the sharp decline from the previous week as the Federal Reserve delivers another unexpected rate cut, and the exchange rate may continue to give back the correction from the 2008 low (0.6006) as the Relative Strength Index (RSI) sits in oversold territory.

AUD/USD bounces back from the yearly low (0.6123) as the Federal Open Market Committee (FOMC) reduces the benchmark interest rate to a fresh threshold of 0.00% to 0.25%, with the central bank pledging to boost its Treasury security holdings by at least $500B, while holdings of mortgage-backed securities will be increased by at least $200B.

The zero-interest rate policy (ZIRP) comes as the Fed cancels its official meeting starting on March 17, and it remains to be seen if the FOMC will take additional steps to insulate the US economy from COVID-19 as the central bank stands ready to “to adjust its plans as appropriate.”

Recent remarks from Chairman Jerome Powell suggest the FOMC will rely on its unconventional tools as the central bank head warns negative interest rates are not “appropriate,” and Fed officials may call upon US lawmakers to support the economy as monetary policy lacks the tools to “reach individuals and particularly small businesses.” 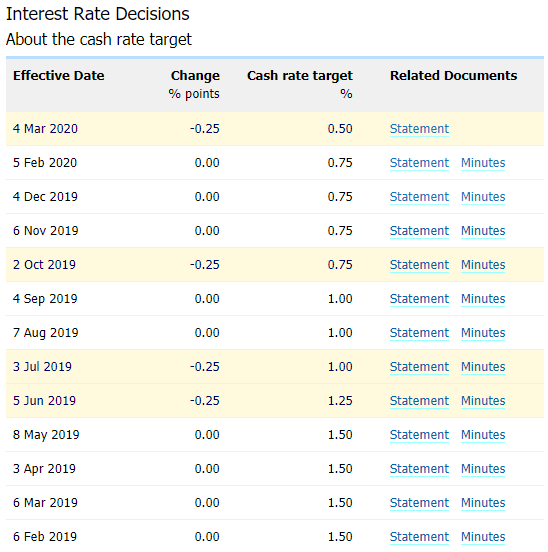 With that said, the Reserve Bank of Australia (RBA) may follow suit and reduce the official cash rate (OCR) to the effective lower bound (ELB) even though the Australian government unveils a A$17.6B fiscal stimulus program as Governor Philip Lowe and Co. are “prepared to ease monetary policy further to support the Australian economy.”

In fact, the ASX 30 Day Interbank Cash Rate Futures reflect a 100% probability for an RBA rate cut, and the Australian Dollar may continue to exhibit a bearish behavior ahead of the next meeting on April 7 as the central bank states that the “Bank will announce further policy measures to support the Australian economy on Thursday.”

In turn, AUD/USD may continue to give back the correction from the 2008 low (0.6006), and the bearish momentum may gather pace over the coming days as the Relative Strength Index (RSI) holds below 30 and sits in oversold territory.