NZD/USD attempts to retrace the decline from last week amid growing bets for a Federal Reserve rate cut, but the exchange rate may continue to exhibit a bearish behavior as the Relative Strength Index (RSI) sits in oversold territory.

NZD/USD bounces back from the yearly low (0.6191) as the Federal Open Market Committee (FOMC) comes under pressure to insulate the US economy, with President Donald Trump tweeting that “as usual, Jay Powell and the Federal Reserve are slow to act.” 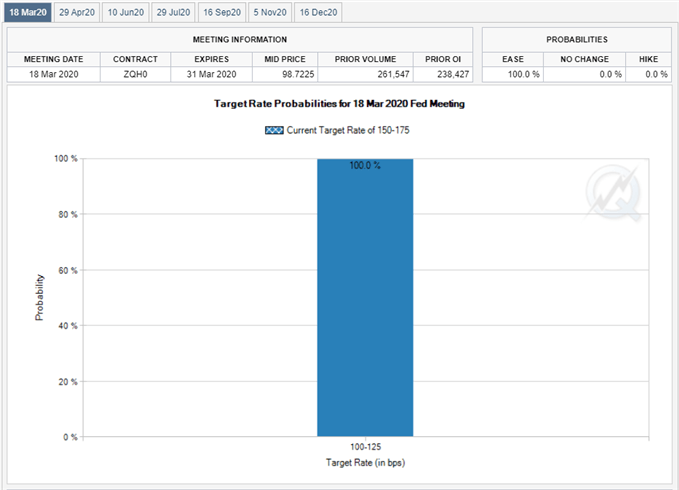 At the same time, Fed Fund futures now reflect a 100% probability for a 50bp rate cut on March 18, and the FOMC may have little choice but to reestablish its rate easing cycle as the coronavirus continues to pose a threat to the global supply chain.

It remains to be seen if the FOMC will respond to the coronavirus and abandon the wait-and-see approach as Fed Vice Chair Richard Clarida insists that “the current stance of monetary policy likely will remain appropriate.” In turn, the Federal Reserve may merely attempt to buy time as “participants concurred that maintaining the current stance of policy would give the Committee time for a fuller assessment of the ongoing effects on economic activity of last year's shift to a more accommodative policy stance.”

More of the same from the FOMC may spark a bullish reaction in the US Dollar as market participants scale back bets for lower interest rates, but a rate cut paired with a shift in the forward guidance may fuel a larger rebound in NZD/USD as the central bank reestablishes its rate easing cycle.

Until then, NZD/USD may continue to exhibit a bearish behavior as the exchange rate snaps the range from the second half of 2019, while the Relative Strength Index (RSI) extends the downward trend from earlier this year and sits in oversold territory.