The price of gold appears to be stuck in a narrow range as China combats the economic headwinds arising from the coronavirus, but the precious metal may attempt to break out of the monthly range as the bearish momentum abates.

The recent advance in the price of gold appears to be capped as the People’s Bank of China (PBOC) plans to cut the rate for its medium-term lending facility (MLF) to 3.15% from 3.25% on CNY 200B worth of loans, and Chinese officials may take additional steps to ward off an economic shockby prescribing additional monetary as well as fiscal stimulus programs.

The efforts by China may sap the appeal of gold as Foreign Minister Wang Yi insists that “the Chinese economy is well-positioned to overcome all risks and challenges,” and the price of bullion may consolidate over the coming days as the recent advance fails to produce a run at the monthly high ($1594).

However, the threat to the global economy may trigger a response from major central banks as Federal Reserve Chairman Jerome Powell tells US lawmakers that thecoronavirus “could lead to disruptions in China that spill over to the rest of the global economy.”

In turn, the Federal Open Market Committee (FOMC) Minutes may sounds more dovish this time around, and it remains to be seen if the central bank will alter the forward guidance when it updates the Summary of Economic Projections (SEP) in March as Fed officials pledge to “respond accordingly” to a material change in the growth outlook. 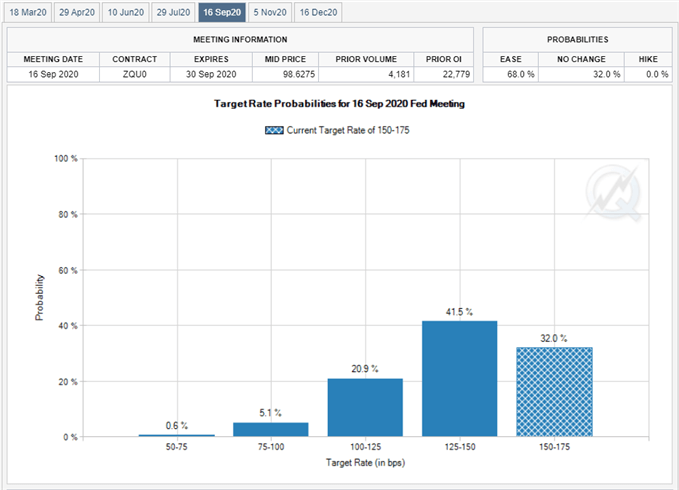 With that said, Fed Fund futures show a greater than 60% probability for a rate cut in September, and the FOMC may come under pressure to abandon the wait-and-see approach for monetary policy as President Donald Trump tweets that the “Fed Rate is too high.”

As a result, the price of gold may continue to exhibit a bullish behavior in 2020 as market participants look for an alternative to fiat-currencies, and the broader outlook for bullion remains constructive as the reaction to the former-resistance zone around $1447 (38.2% expansion) to $1457 (100% expansion) helped to rule out the threat of a Head-and-Shoulders formation as the region provided support.