The price of gold attempts to retrace the decline from earlier this week, but the precious metal may struggle to retain the advance from the start of the year as the bullish momentum abates.

Gold bounces back from a fresh weekly low ($1548) amid the limited reaction to the ADP Employment report, but the price for bullion may continue to carve a string of lower highs and lows as fresh data prints coming out of the US sap bets for a Federal Reserve rate cut in 2020.

The 291K expansion in private-sector employment may generate a larger-than-expected pickup in US Non-Farm Payrolls (NFP), which is anticipated to show a 160K rise in January. At the same time, Average Hourly Earnings are expected to climb to 3.0% from 2.9% in December, and a batch of positive developments may encourage the Federal Open Market Committee (FOMC) to stay on the sidelines as “there are some signs that global growth may be stabilizing after declining since mid-2018.”

In turn, Chairman Jerome Powell may stick to the same script when the central bank head testifies in front of Congress next week, and the FOMC may continue to endorse a wait-and-see approach at the next interest rate decision on March 18 as the committee insists that “the current stance of monetary policy is appropriate to support sustained economic growth, a strong labor market, and inflation returning to our symmetric 2 percent objective.” 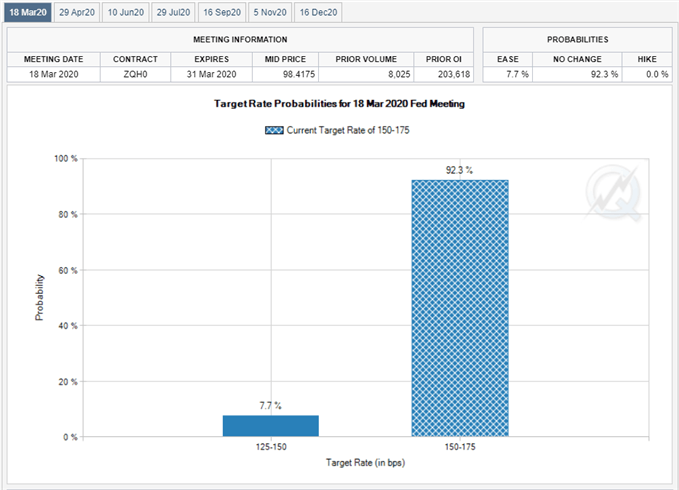 In fact, Fed Fund futures show a greater than 90% probability the FOMC will keep the benchmark interest rate in its current threshold of 1.50% to 1.75% at the next meeting, but it remains to be seen if Fed officials will adjust the forward guidance when the central bank updates the Summary of Economic Projections (SEP) as the Trump administration remains reluctant to rollback tariffs.

The slowdown in global growth along with the ongoing shift in US trade policy may put pressure on the FOMC to further insulate the economy, and Chairman Powell and Co. may adopt a more dovish tone over the coming months as the central bank emphasizes that “policy is not on a preset course.”

With that said, market participants may look for an alternative to fiat-currencies if the FOMC shows a greater willingness to revisit its rate easing cycle, and the broader outlook for the price of gold remains constructive, with the reaction to the former-resistance zone around $1447 (38.2% expansion) to $1457 (100% expansion) helping to rule out the threat of a Head-and-Shoulders formation as the region acts as support.

Nevertheless, the price for gold may continue to consolidate ahead of the NFP report as the recent advance in the precious metal fails to produce a test of the yearly high ($1611), and the bullish momentum from earlier this year may continue to abate as the Relative Strength Index (RSI) falls back from overbought territory and snaps the upward trend from December.