USD/CAD Consolidation to Persist Beyond US Retail Sales Report

USD/CAD consolidates after climbing to a high of 1.3105 during the first full week of January, but the recent weakness in the Canadian Dollar may prove to be short-lived as the exchange rate snaps the range bound price action from the second half of 2019.

USD/CAD remains little changed from earlier this week even though the US and China sign the Phase One trade deal, and updates to the US Retail Sales report may also generate a muted reaction as household spending is expected to increase 0.3% in December after expanding 0.2% the month prior.

A small uptick in private sector consumption may keep USD/CAD within a narrow range as it reinforces the Federal Reserve’s view that the current stance of monetary policy is“likely to remain appropriate for a time as long as incoming information about the economy remained broadly consistent with the economic outlook.” 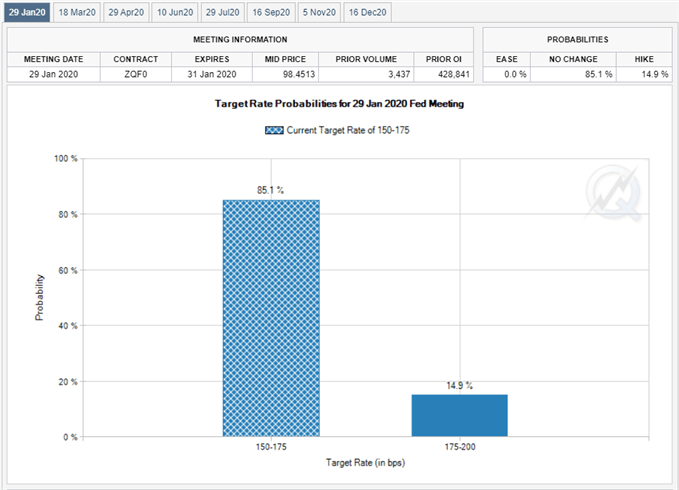 In turn, Fed Fund futures may continue to reflect overwhelming expectations the Federal Open Market Committee (FOMC) will keep the benchmark interest rate in its current threshold of 1.50% to 1.75% on January 29, but the ongoing shift in US trade policy may become a growing concern for the central bank as the Trump administration remains reluctant to rollback tariffs.

Moreover, the Trump administration appears to be on track to implement “additional duties of up to 100 percent on certain products of France” as the Office of the US Trade Representative (USTR) insists that the Digital Services Tax (DST) is “unreasonable,” and Chairman Jerome Powell and Co. may end up adjusting the forward guidance when Fed officials update the Summary of Economic (SEP) at the next quarterly meeting in March.

In contrast, the Bank of Canada (BoC) may continue to endorse a wait-and-see approach as US lawmakers look poised to pass the United States-Mexico-Canada Agreement (USMCA) over the coming days, and the central bank may stick to the same script from the last interest rate decision as “the Bank’s October projection for global economic growth appears to be intact.”

In turn, the BoC may merely attempt to buy time at the next meeting on January 22, and the Canadian Dollar may continue to outperform its US counterpart in 2020 as Governor Stephen Poloz and Co. remain reluctant to reverse the rate hikes from 2018.

However, the monthly opening range raises the scope for a larger rebound in USD/CAD as it fails to test the 2019 low (1.2952) during the first full week of January, with the Relative Strength Index (RSI) highlighting a similar dynamic as the oscillator bounces back from oversold territory and offers a textbook buy signal.