USD/CAD appears to be stuck in a narrow range ahead of the Bank of Canada (BoC) interest rate decision, but the series of failed attempts to test the October high (1.3348) may generate a near-term correction as the exchange rate continues to track the price action from the third quarter.

USD/CAD struggles to extend the advance from the October low (1.3042) as US President Donald Trump tweets “the Fed should lower rates,” with the Commander in Chief going onto say that the “Dollar is very strong relative to others.”

President Trump may continue to press the Federal Reserve to deliver lower interest rates amid the weakening outlook for global growth, but recent remarks from Chairman Jerome Powell and Co. suggest the central bank will take a break from its rate easing cycle as officials see “the current stance of monetary policy as likely to remain appropriate as long as incoming information about the economy remains broadly consistent with our outlook of moderate economic growth.” 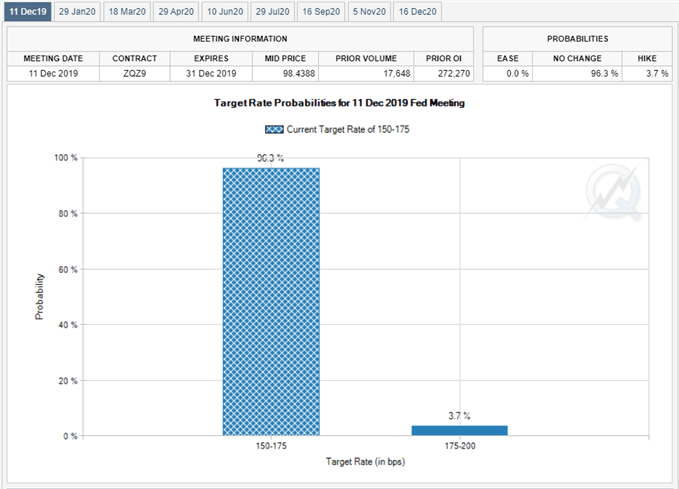 In turn, Fed Fund futures continue to reflect a greater than 90% probability the Federal Open Market Committee (FOMC) will retain the current policy on December 11, and the central bank may tame speculation for an imminent rate cut as Fed officials emphasize that “the Committee would continue to monitor the implications of incoming information for the economic outlook as it assessed the appropriate path of the target range for the federal funds rate.”

It remains to be seen if the FOMC will continue to respond to the shift in trade policy as the Trump administration struggles to reach a trade deal with China, and Chairman Powell and Co. may come under pressure to further insulate the economy in 2020 as the US mulls higher tariffs for Europe.

At the same time, the Bank of Canada (BoC) appears to be in no rush to alter the course for monetary policy as Governor Stephen Poloz and Co. insists that “the current degree of monetary policy stimulus remains appropriate.” 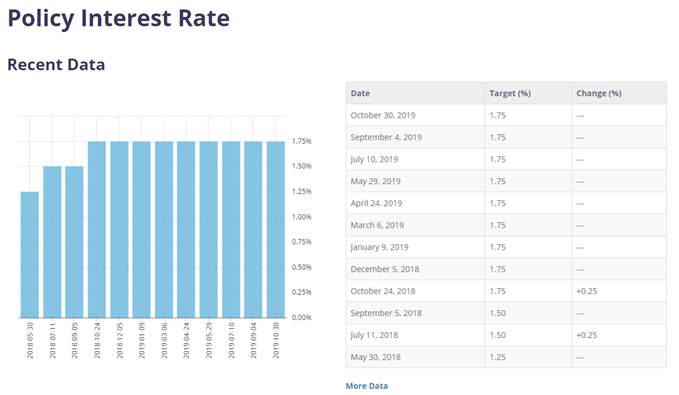 In turn, the BoC may stick to the same script at its last meeting for 2019, and the central bank may largely endorse a wait-and-see approach for the foreseeable future as “the Bank projects real GDP will grow by 1.5 percent this year, 1.7 percent in 2020 and 1.8 percent in 2021.”

With that said, more of the same from the BoC may keep USD/CAD within the range-bound price action from the third quarter as the FOMC shows a greater willingness to take a break from its rate easing cycle.

As a result, the string of failed attempts to test the October high (1.3348) may bring the downside targets back on the radar, and the Relative Strength Index (RSI) may offer a bearish signal as it threatens the upward trend from earlier this month.