The price of gold breaks out of a narrow range on the back dismal data prints coming out of the US economy, and the failed attempt to test the monthly-low ($1459) may bring the topside targets back on the radar as a bull-flag formation takes shape.

The near-term correction in gold appears to be coming to an end as the 1.1% decline in US Durable Goods Orders report puts increased pressure on the Federal Reserve to insulate the US economy.

A deeper look at the report shows Non-Defense Capital Goods Orders excluding Aircrafts, a proxy for business investment, also narrowing 0.7% in September, and the slowdown in private-sector consumption may become a growing concern for the Federal Open Market Committee (FOMC) as household spending “has been the key driver of growth.”

In response, US President Donald Trump tweets that the “Fed was way too fast to raise, and way too slow to cut,” and the central bank may have little choice but to further embark on its rate easing cycle amid signs of a looming recession. 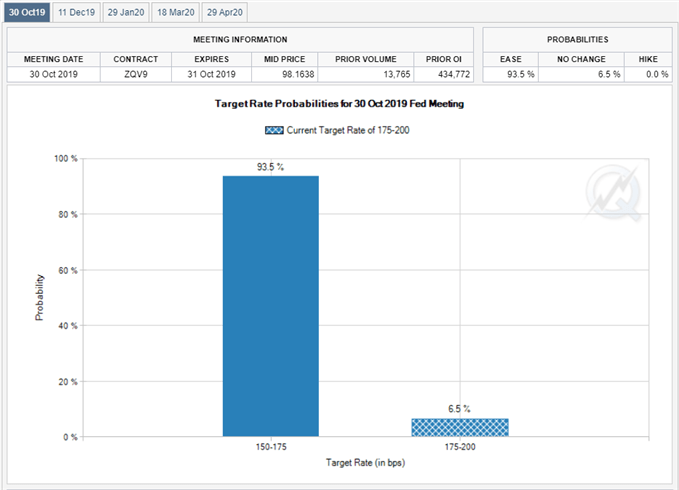 In turn, Fed Fund futures still show a greater than 90% probability for another 25bp reduction on October 30, and the central bank may continue to reverse the four rate-hikes from 2018 as “weakness in global growth and trade policy uncertainty haveweighed on the economy.”

However, the growing dissent within the FOMC may fuel fears of a policy error as the central bank makes an unexpected announcement to purchase US Treasury Bills in the secondary market, and it remains to be seen if Chairman Jerome Powell and Co. will project a lower trajectory for the benchmark interest rate as the US-China trade war appears to be coming to an end.

With that said, falling interest rates along with fears of a global recession may heighten the appeal of gold, and market participants may look to hedge against fiat currencies as the International Monetary Fund (IMF) continues to cut its growth forecast for the world economy.

Keep in mind, the near-term outlook for gold remains mired by a head-and-shoulders formation, but a bull-flag appears to be taking shape following the failed attempt to test the monthly-low ($1459).