NZD/USD extends the advance from the start of the month on the back of broad based US Dollar weakness, but the New Zealand Dollar may face headwinds over the near-term as the Reserve Bank of New Zealand (RBNZ) endorses dovish forward guidance for monetary policy.

NZD/USD appears to be on track to test the September-high (0.6451) amid growing speculation for another Federal Reserve rate cut. 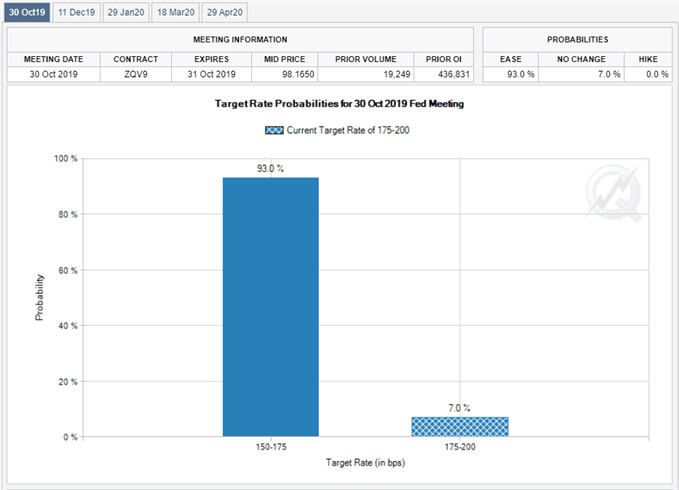 In fact, Fed Fund futures now show a greater than 90% probability for another 25bp reduction on October 30, and the central bank may continue to reverse the four rate-hikes from 2018 amid fears of a looming recession.

Updates to the US Durable Goods Orders report may push the Federal Open Market Committee (FOMC) to further insulate the economy as demand for large-ticket items are expected to contract 0.7% in September.

Signs of slowing consumption may push the FOMC to change its tune as private-sector spending “has been the key driver of growth,” and the central bank may continue to embark on its rate easing cycle as “weakness in global growth and trade policy uncertainty have weighed on the economy.”

In turn, the FOMC may prepare US households and businesses for lower interest rates, but it remains to be seen if Chairman Jerome Powell and Co. make further adjustments to the Summary of Economic Projections (SEP) as Fed officials see the benchmark interest rate around 1.50% to 1.75% through 2020.

In contrast, it seems as though the RBNZ will push monetary policy into uncharted territory as Deputy GovernorGeoff Bascand reveals that “the Reserve Bank is undertaking further preparatory work on less conventional monetary policy tools.”

The remarks by Mr. Bascand suggest the RBNZ will push the official cash rate (OCR) closer to zero as “lower rates still may be needed to achieve our inflation and maximum sustainable employment objectives.” The dovish forward guidance instills a bearish outlook for the New Zealand Dollar as the central bank appears to be on track to implement non-standard measures “in the event that the policy rate is pushed down to its effective lower bound.”

As a result, NZD/USD may face headwinds ahead of the next RBNZ meeting on November 13, but recent price action foreshadows a larger rebound from the yearly-low (0.6204) as the exchange rate extends the series of higher highs and lows from the previous week.