GBP/USD at Risk for Further Losses as Brexit Negotiations Collapse

GBP/USD extends the decline from the monthly-high (1.2413) amid little signs of an imminent Brexit deal, and the exchange rate may exhibit a more bearish behavior ahead of the October 31 deadline as Relative Strength Index (RSI) tracks the downward trend carried over from the previous month.

GBP/USD at Risk for Further Losses as Brexit Negotiations Collapse

GBP/USD struggles to retain the advance from the September-low (1.1958) as European Commission President Jean-Claude Juncker insists that “the risk of a no-deal remains real.”

At the same time, European Parliament President David Sassoli notes that the assembly “would support a request from the UK government to extend the withdrawal period in order to have time for a general election or a referendum.”

It remains to be seen if the UK government will be able to secure a trade deal as Prime Minister Boris Johnsonmeets with TaoiseachLeo Varadkar ahead of the EU Summit starting on October 17, but little evidence of a Brexit deal may continue to drag on the British Pound as Business Secretary Andrea Leadsom insists that the administration “will abide” to the Benn Act.

In turn, headlines surrounding Brexit may continue to sway GBP/USD as the Bank of England (BoE) retains a wait-and-see approach for monetary policy, and the central bank may stick to the same script at the next meeting on November 7 as Governor Mark Carney insist that “the monetary policy response to No Deal would not be automatic.”

Nevertheless, retail sentiment remains skewed even though GBP/USD struggles to retain the advance from the September-low (1.1958), with the British Pound at risk of facing additional headwinds as UK officials will be forced to hold a general election or a second referendum for the EU to push back the Brexit deadline, 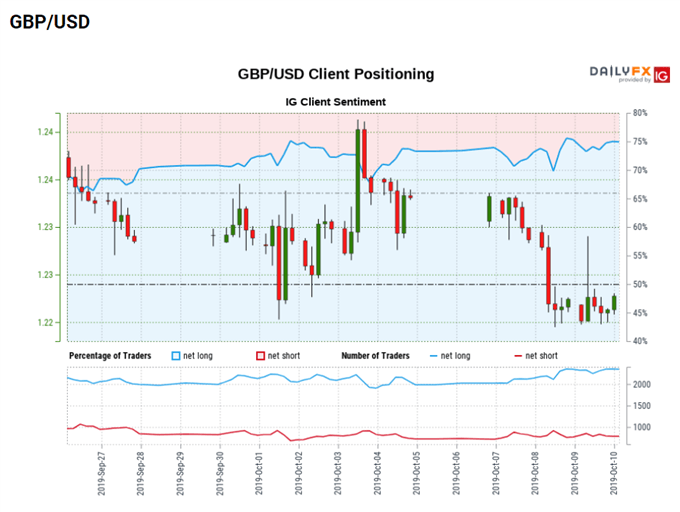 The IG Client Sentiment Report shows74.56%of traders are still net-long GBP/USD compared to 73.7% in September, with the ratio of traders long to short at 2.93 to 1.

In fact, traders have remained net-long since May 6 when GBP/USD traded near the 1.3100 handle even though price has moved 6.7% lower since then.The number of traders net-long is 0.30% lower than yesterday and 9.56% higher from last week, while the number of traders net-short is 1.85% lower than yesterday and 0.25% lower from last week.

The rise in net-long interest suggests market participants are attempting to fade the recent weakness in GBP/USD as the exchange rate appears to be stuck in a narrow range, but the persistent tilt in retail position offers a contrarian view to crowd sentiment as the exchange rate struggles to retain the advance from the yearly-low (1.1958).

For more in-depth analysis, check out the 4Q 2019 Forecast for the British Pound