Retail Shorts Jump 30% as GBPUSD Claws Back from 2019 Low

GBPUSD pulls back from the monthly-high (1.2385) even though the UK Parliament pushes through legislation to block a no-deal Brexit, but the recent rebound in the exchange rate appears to be spurring a shift in retail interest as net-short positions jump 30% from the previous week.

Retail Shorts Jump 30% as GBPUSD Claws Back from 2019 Low

Headlines surrounding Brexit may continue to sway GBPUSD as Prime Minister Boris Johnson will be forced to request a three-month extension if a deal is not achieved by October 19, and UK lawmakers may put increased pressure on the new government to reach an agreement with the European Union (EU) as Parliament rejects plans for a snap election.

It remains to be seen if PM Johnson will be able to strike a deal with less than 60 days left until the October 31 deadline, and the risk of a delayed Brexit may push the Bank of England (BoE) to alter the forward guidance for monetary policy as “increased uncertainty about the nature of EU withdrawal means that the economy could follow a wide range of paths over coming years.”

Nevertheless, the BoE is likely to retain the current policy at the next meeting on September 18 as Governor Mark Carney and Co. insist that “the monetary policy response to Brexit, whatever form it takes, will not be automatic,” and recent comments from Monetary Policy Committee (MPC) member Gertjan Vlieghe suggests the central bank is in no rush to switch gears as “the total monetary firepower is less than we had in the period leading up to previous recessions.”

With that said, a delayed Brexit may keep the BoE on the sidelines ahead Governor Carney’s departure in January 2020, but the recent rebound in GBPUSD appears to be shaking up retail interest as the exchange rate claws back from the lowest level since the British Pound flash crash in 2016. 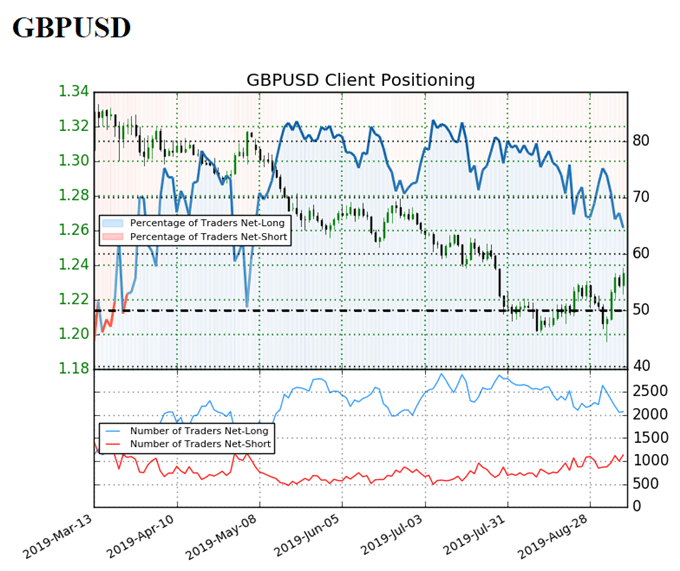 The IG Client Sentiment Report shows64.6%of traders are still net-long GBPUSD compared to 73.7% last week, with the ratio of traders long to short at 1.83 to 1.

Keep in mind, traders have remained net-long since May 6 when GBPUSD traded near the 1.3100 handle even though price has moved 5.8% lower since then.The number of traders net-long is 6.2% lower than yesterday and 18.7% lower from last week, while the number of traders net-short is 1.0% lower than yesterday and 30.0% higher from last week.

The decline in net-long position suggests stops were triggered during the first full week of September as GBPUSD slipped to a fresh yearly-low (1.1958), but the recent jump in net-short interest comes as the exchange rate works its way back towards the former-support zone around 1.2370 (50% expansion) to 1.2440 (50% expansion).