GBPUSD breaks out of the range-bound price action from earlier this month, with recent developments in the Relative Strength Index (RSI) foreshadowing a larger correction in the exchange rate as the oscillator snaps the bearish trend from earlier this year.

GBPUSD rallies to a fresh monthly-high (1.2273) as UK Prime Minister Boris Johnson meets with French President Emmanuel Macron as well as German Chancellor Angela Merkel to renegotiate the Brexit deal, but it remains to be seen if a compromise will be reached with less than 70 days until the October 31 deadline.

The lingering threat of a no-deal Brexit may become a growing concern for the Bank of England (BoE) as the central bank has 1 meeting left before the UK departs the European Union (EU), and the central bank may come under pressure to alter the forward guidance at the next interest rate decision on September 19 as “increased uncertainty about the nature of EU withdrawal means that the economy could follow a wide range of paths over coming years.”

In turn, the Monetary Policy Committee (MPC) may draw up a contingency plan to a no-deal Brexit as “underlying growth appears to have slowed since 2018 to a rate below potential,” and a batch of dovish comments is likely to produce headwinds for the British Pound as it fuels speculation for lower interest rates.

On the other hand, more of the same from the BoE may heighten the appeal of the British Pound asGovernor Mark Carney and Co. still insist that “increases in interest rates, at a gradual pace and to a limited extent, would be appropriate to return inflation sustainably to the 2% target,” but retail positions remains skewed going into the last full week of August even though GBPUSD continues to track the bearish trend from earlier this year. 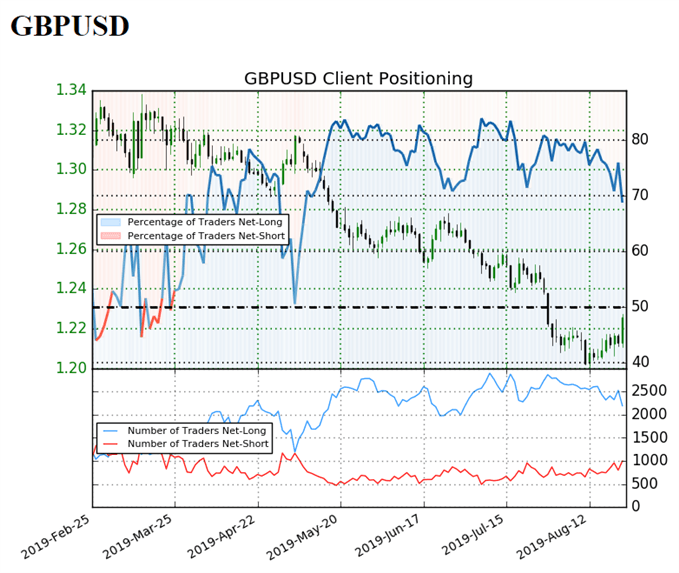 The IG Client Sentiment Report shows 68.7% of traders are still net-long GBPUSD compared to 74.3% earlier this week, with the ratio of traders long to short at 2.2 to 1.

The ongoing drop in net-long position is indicative of profit-taking behavior amid the recent rebound in GBPUSD, but the persistent tilt in retail interest offers a contrarian view to crowd sentiment as the exchange rate continues to track the bearish trend from earlier this year.