GBPUSD struggles to retain the rebound from the monthly-low (1.2439) as the Conservative Party leadership contest renews the threat of a no-deal Brexit, but fresh data prints coming out of the UK may keep the exchange rate afloat should the developments instill an improved outlook for growth and inflation.

The upcoming change in leadership may produce headwinds for the British Pound as front-runner Boris Johnson stands ready to depart from the European Union (EU) without a trade deal, and the challenges facing the UK economy may force the Bank of England (BoE) to alter the forward guidance for monetary policy as the central bank warns “growth in the second quarter will be considerably weaker.”

It seems as though the BoE is preparing to abandon the rate hiking cycle as “a global trade war and a No Deal Brexit remain growing possibilities,” and the Monetary Policy Committee (MPC) may continue to strike a cautious tone at the next meeting on August 1 as the central bank updates its quarterly inflation report (QIR).

However, fresh data prints coming out of the UK may instill an improved outlook for the region as the economy is anticipated to add 45K jobs during the three months through May, while Average Weekly Earnings excluding Bonus are anticipated to increase to 3.5% from 3.4% during the same period.

The ongoing improvement in the labor market should keep the BoE on the sidelines as officials insist that “an ongoing tightening of monetary policy over the forecast period, at a gradual pace and to a limited extent, would be appropriate to return inflation sustainably to the 2% target at a conventional horizon.”

In turn, it remains to be seen if Governor Mark Carney and Co. will switch gears in 2019, but retail sentiment remains skewed ahead of the UK data prints despite the recent pickup in GBPUSD volatility. 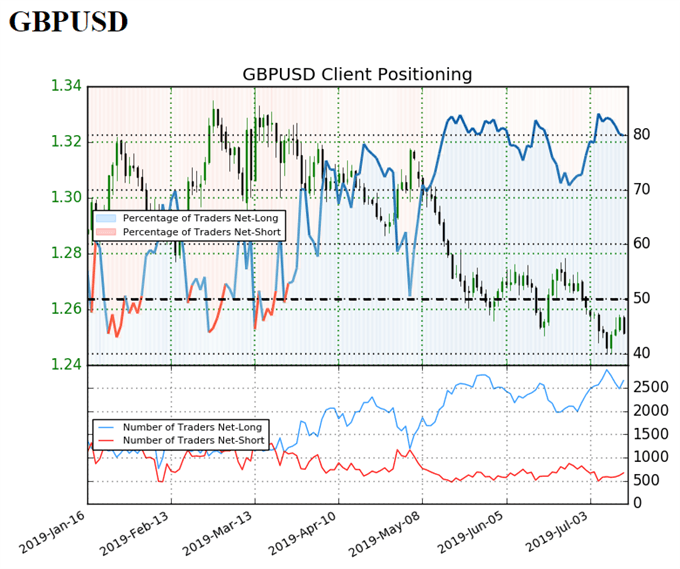 The IG Client Sentiment Report shows79.9% of traders are still net-long GBPUSD compared to 83.2% last week, with the ratio of traders long to short at 3.97 to 1.In fact, traders have remained net-long since May 6 when GBPUSD traded near the 1.3100 handle even though price has moved 4.5% lower since then.

The number of traders net-long is 2.0% higher than yesterday and 2.0% lower from last week, while the number of traders net-short is 2.6% lower than yesterday and 11.3% higher from last week. The small decline in net-long position may account for profit-taking behavior amid the recent rebound in GBPUSD, while net-short interest remains depressed ahead of the leadership contest, with the results expected to be announced on July 22.

The ongoing tilt in retail interest offers a contrarian view to crowd sentiment especially as GBP/USD snaps the bullish trend from late-2018, while the Relative Strength Index (RSI) continues to track the bearish formation from earlier this year.