AUDUSD holds a narrow range ahead of the semi-annual testimony with Federal Reserve Chairman Jerome Powell, but the monthly opening range undermines the recent rebound in the exchange rate as the advance from the June-low (0.6832) fails to spur a test of the May-high (0.7061).

AUDUSD consolidates following the US Non-Farm Payrolls (NFP) report as the above-forecast print suggests the Federal Reserve will deliver an “insurance cut” at the next interest rate decision on July 31.

The Federal Open Market Committee (FOMC) is widely expected to insulate the US economy as the “apparent progress on trade turned to greater uncertainty,” but the central bank appears to be in no rush to implement a rate easing cycle as “many labor market indicators remain strong.” 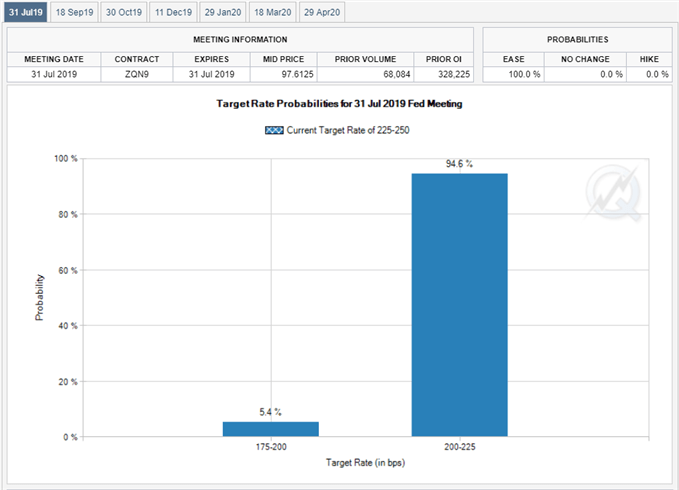 In turn, Chairman Powell may strike a more balanced tone in front of US lawmakers as the economy shows little signs of a looming recession, and a batch of less dovish comments may keep AUDUSD under pressure as Fed Fund futures reflect narrowing bets for a 50bp rate cut.

In turn, AUDUSD may show a limited reaction to the NAB Business Confidence survey as Governor Philip Lowe and Co. endorse a dovish forward guidance, and the RBA may continue to push the official cash rate to fresh record lows in 2019 as the US and China, Australia’s largest trading partner, struggle to reach a deal.

With that said, current market conditions may drag on AUDUSD, and the exchange rate stands at risk of exhibiting a more bearish behavior over the coming days as the advance from the June-low (0.6832) sputters ahead of the May-high (0.7061).

Keep in mind, the AUDUSD rebound following the currency market flash-crash has been capped by the 200-Day SMA (0.7094), with the exchange rate marking another failed attempt to break/close above the moving average in April.