The recent pullback in EURUSD appears to be stalling ahead of the US Non-Farm Payrolls (NFP) report, with the exchange rate at risk of exhibiting a more bullish behavior over the coming days as it struggles to extend the string of lower highs and lows from earlier this week.

EURUSD struggled to hold its ground as the European Union nominates International Monetary Fund (IMF) Managing Director Christine Lagarde to replace European Central Bank (ECB) President Mario Draghi, and it remains to be seen if the Governing Council will implement more non-standard measures ahead of the upcoming transition as the central bank prepares to launch another round of Targeted Long-Term Refinance Operations (TLTRO) in September.

Recent comments from ECB board member Philip Lane suggest the central bank will take additional steps to insulate the monetary union as “an extended phase of below-target inflation poses a communication challenge in maintaining focus on the medium-term inflation goal.” As a result, it seems as though the ECB will continue to push monetary policy into unchartered territory as Mr. Lane insists that the Governing Council “can add further monetary accommodation if it is required to deliver our objective.”

The dovish forward guidance for monetary policy undermines the broader outlook for EURUSD as there appears to be a growing discussion at the ECB to implement a negative interest rate policy (NIRP) for the Main Refinance Rate, its flagship benchmark for borrowing costs, but the Governing Council may keep monetary policy on auto-pilot ahead of President Draghi’s departure at the end of October especially as the Euro area shows limited signs of an imminent recession. 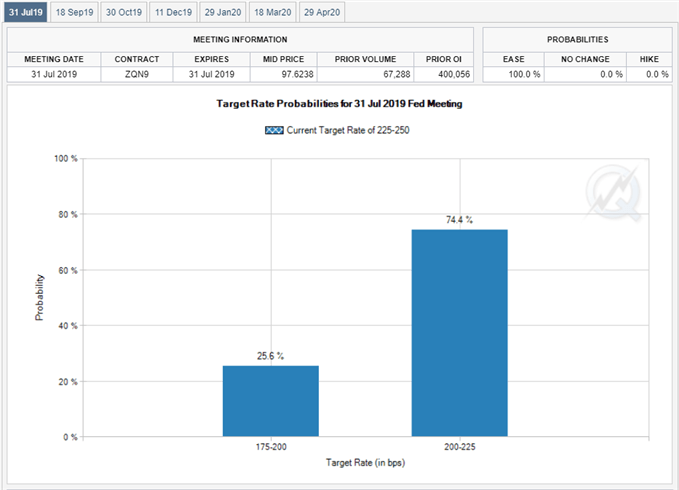 In turn, the Federal Reserve interest rate decision on tap for July 31 may play an increased role in dictating EURUSD volatility as Fed Fund futures still highlight a 100% probability for at least a 25bp reduction. Speculation for a change in regime may keep EURUSD afloat over the near-term, and the Federal Open Market Committee (FOMC) may come under pressure to reverse the four rate-hikes from 2018 amid the ongoing shift in US trade policy.

With that said, the current environment may generate a larger correction in EURUSD as Chairman Jerome Powell & Co. start to project a lower trajectory for the benchmark interest rate.