EUR/USD attempts to retrace the decline from earlier this week as the U.S. Durable Goods Orders report does little to heighten the appeal of the greenback, and the failed attempt to test the 2019-low (1.1176) may spur a rebound in the euro-dollar exchange rate as it tracks the range-bound price action from the previous month.

EUR/USD climbs to a session-high (1.1212) as demand for U.S. Durable Goods contracts 1.6% in February, while Non-Defense Capital Goods Orders excluding Aircrafts, a proxy for business investment, falls 0.1% during the same period amid projections for a 0.1% rise.

Waning orders for large-ticket items may become a growing concern for the Federal Reserve as it dampens the outlook for private-sector consumption, one of the leading drivers of growth, and an increasing number of Fed officials may show a greater willingness to shore up the slowing economy as the central bank plans to wind down the $50B/month in quantitative tightening (QT) by the end of September 2019. 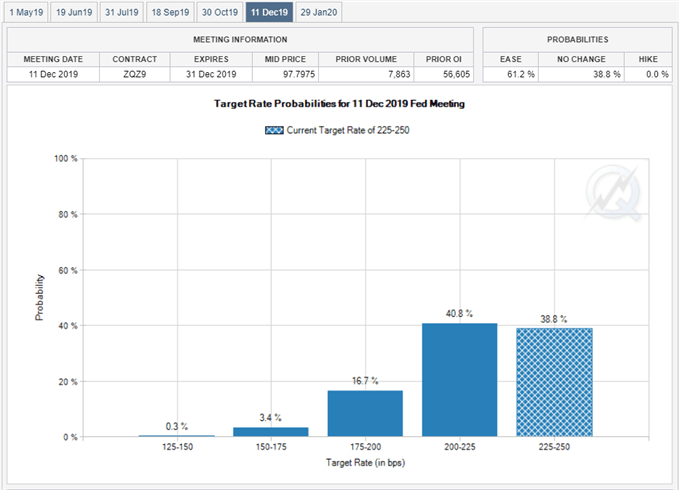 The Federal Open Market Committee (FOMC) may continue to adjust the forward-guidance over the coming months as the inversion in the U.S. Treasury yield curve warns of a looming recession, and the central bank may show a greater willingness to switch gears later this year as Fed Fund Futures still reflect a greater than 50% probability for a rate-cut in December. However, the FOMC may largely endorse a wait-and-see approach at the next interest rate decision on May 1 as Fed officials project a longer-run interest rate of 2.50% to 2.75%, and it remains to be seen if the committee will abandon the hiking-cycle later this year as Chairman Jerome Powell insists that ‘the federal funds rate is now in the broad range of estimates of neutral--the rate that tends neither to stimulate nor to restrain the economy.’

With that said, the U.S. dollar remains vulnerable ahead of the Non-Farm Payrolls (NFP) report amid the mixed data prints coming out of the economy, but the broader outlook for EUR/USD remains clouded with mixed signals following the FOMC meeting as both price and the Relative Strength Index (RSI) break out of the bearish formations from earlier this year after trading to a fresh 2019-low (1.1176). 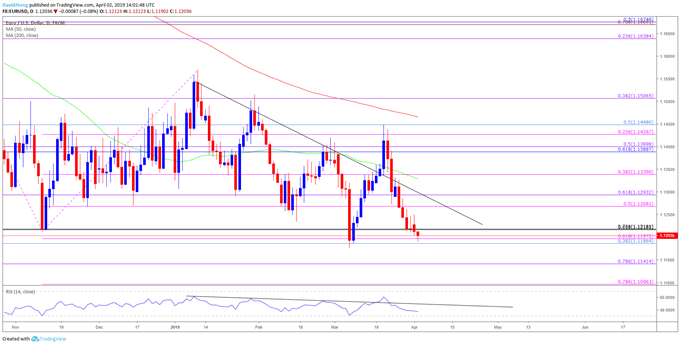