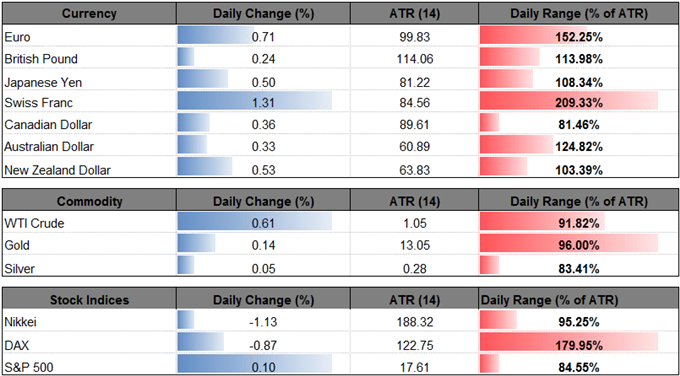 USD/JPY remains under pressure as U.S. New Home Sales slip 9.3% in December, and the pair may continue to give back the rebound from the 2017-low (107.32) as the Gross Domestic Product (GDP) report is anticipated to show a slowdown in the growth rate.

The advance GDP report is expected to show the U.S. economy growing an annualized 3.0% versus the 3.2% expansion in the third-quarter of 2017, and another batch of lackluster data prints may generate fresh weekly-lows in the dollar-yen exchange rate as it saps bets for a March Fed rate-hike.

However, a pickup in the core Personal Consumption Expenditure (PCE) may ultimately heighten the appeal of the greenback as the Federal Reserve’s preferred gauge for inflation is projected to increase 1.9% per annum during the last three-months of 2017, and signs of stronger price growth may keep the central bank on course to deliver three rate-hikes this year especially as ‘many participants judged that the proposed changes in business taxes, if enacted, would likely provide a modest boost to capital spending.’

Keep in mind, recent price action keeps the near-term outlook tilted to the downside as USD/JPY starts to carve a bearish sequence, while the Relative Strength Index (RSI) dips below 30 and pushes back into oversold territory. Want to know what other currency pairs the DailyFX team is watching? Download and review the Top Trading Opportunities for 2018. 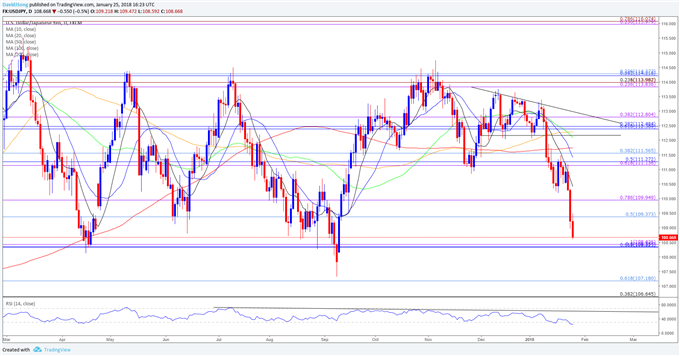 The below-forecast print for Canada Retail Sales has done little to halt the recent decline in USD/CAD, but a marked slowdown the Consumer Price Index (CPI) may tame the bearish sequence in the exchange rate as it dampens bets for an imminent Bank of Canada (BoC) rate-hike.

USD/CAD slipped to a fresh weekly-low (1.2282) even as household spending in Canada increased a marginal 0.2% in November, but the CPI may add to the batch of weaker-than-expected data prints as the headline reading for inflation is anticipated to slow to an annualized 1.9% in December from 2.1% the month prior. After delivering a dovish rate-hike at its first meeting for 2018, signs of easing price pressures may encourage Governor Stephen Poloz and Co. to endorse a wait-and-see approach at its next interest rate decision on March 7 as ‘some continued monetary policy accommodation will likely be needed to keep the economy operating close to potential and inflation on target.’

Keep in mind, the BoC may continue to normalize monetary policy in 2018 as ‘the economic outlook is expected to warrant higher interest rates over time,’ but the central bank appears to be in no rush to implement higher borrowing-costs especially as the ‘uncertainty about the future of NAFTA is weighing increasingly on the outlook.’ With that said, the broader shift in USD/CAD behavior may continue to unfold over the coming months, but the recent decline in the exchange rate appears to be losing steam as price and the Relative Strength Index (RSI) start to deviate from one another. 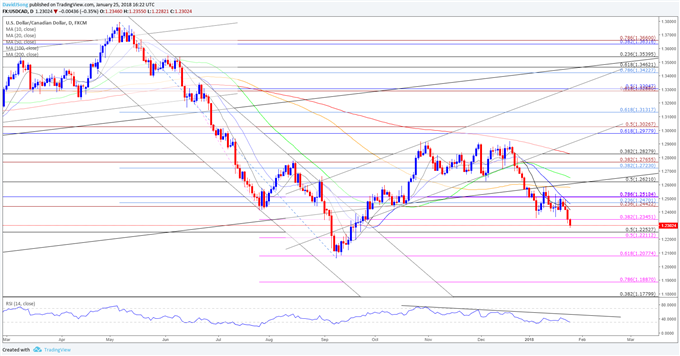