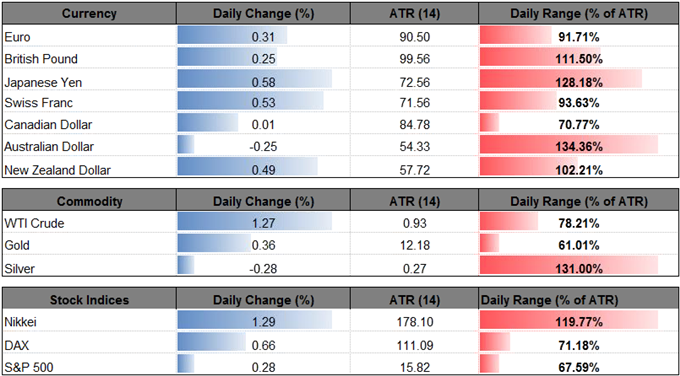 USD/JPY remains under pressure even as the Bank of Japan (BoJ) sticks to its easing-cycle, with the pair at risk for further losses as the bearish momentum appears to be gathering pace.

Recent comments from Governor Haruhiko Kuroda suggest the BoJ is in no rush to wind down the Quantitative/Qualitative Easing (QQE) Program with Yield-Curve Control as the central bank pledges to expand the ‘monetary base until the year-on-year rate of increase in the observed CPI (all items less fresh food) exceeds 2 percent and stays above the target in a stable manner.’

With the BoJ still on autopilot, key developments coming out of the U.S. economy may influence dollar-yen ahead of the Federal Reserve’s interest rate decision on January 31 as the central bank appears to be on course to further normalize monetary policy over the coming months. 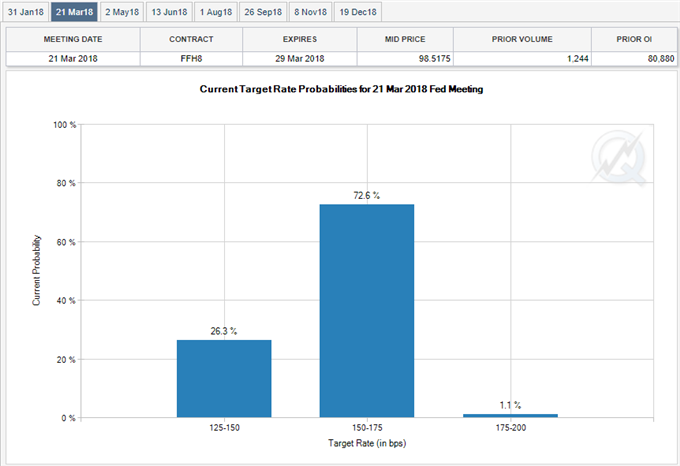 Keep in mind, Fed Fund Futures remain little changed from earlier this month, with market participants still pricing a greater than 70% probability for a March rate-hike, and lackluster developments coming out of the U.S. economy may continue to anchor interest rate expectations as the central bank struggles to achieve the 2% target for inflation.

In turn, downside targets remain on the radar for USD/JPY following the break of the descending triangle, with the pair at risk for further losses as the Relative Strength Index (RSI) continues to track the bearish formation carried over from the summer months. Want to know what other currency pairs the DailyFX team is watching? Download and review the Top Trading Opportunities for 2018. 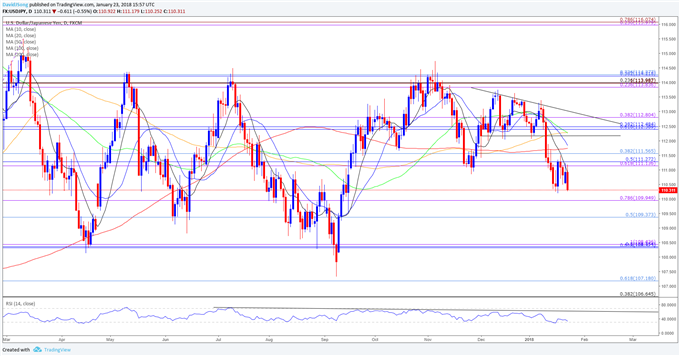 The near-term advance in AUD/USD has started to show signs of exhaustion, with the string of failed attempts to test the 2017-high (0.8125) raising the risk for further losses as the Relative Strength Index (RSI) is on the cusp of flashing a textbook sell-signal.

The key release for Australia comes next week as the region is scheduled to update the Consumer Price Index (CPI), but recent developments in the RSI casts a cautious outlook for AUD/USD as the momentum indicator snaps the bullish formation from December and appears to be coming off of overbought territory.

The aussie-dollar exchange rate may highlight a similar dynamic as it comes up against trendline support, and AUD/USD may exhibit a more bearish behavior ahead of the Reserve Bank of Australia’s (RBA) February 6 meeting as the central bank is already expected to keep the cash rate at the record-low of 1.50%. 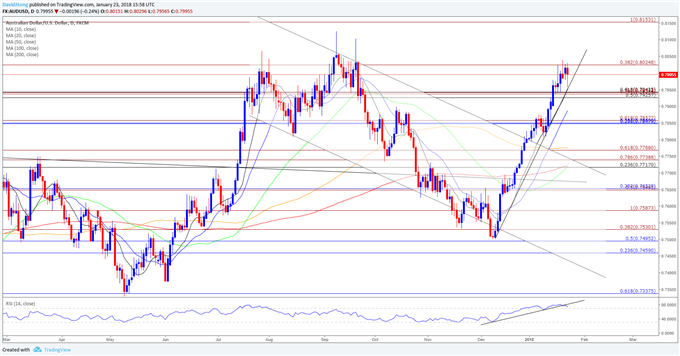