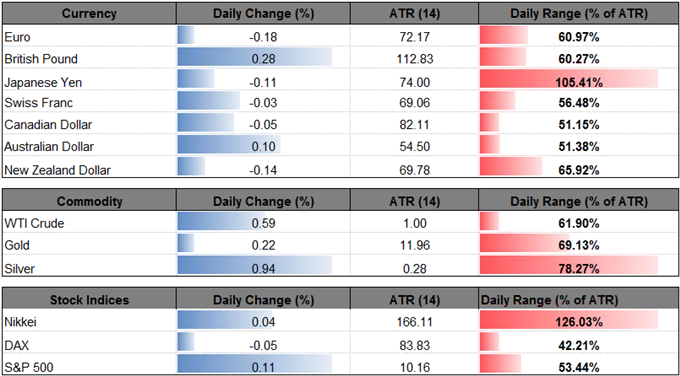 The British Pound pares the sharp decline following the dovish Bank of England (BoE) rate-hike, with GBP/USD at risk of staging a near-term advance following the failed attempt to test the October-low (1.3027).

The BoE appears to be in no rush to further normalize monetary policy after raising the benchmark interest rate for the first time since 2006, and Governor Mark Carney and Co. may endorse a wait-and-see approach at the next meeting on December 13 as officials warn the ‘uncertainties associated with Brexit are weighing on domestic activity, which has slowed even as global growth has risen significantly.’ Limited bets for higher borrowing-costs may undermine the resilience in GBP/USD, with the pound-dollar exchange rate at risk of facing a more bearish fate especially as the Federal Open Market Committee (FOMC) is widely anticipated to developer a 25bp in December.

Nevertheless, a pickup U.K. Manufacturing & Industrial Production may boost the appeal of Sterling as it instills an improved outlook for the real economy, and the Monetary Policy Committee (MPC) may adopt a more hawkish tone over the coming months as‘spare capacity appeared to have eroded, if anything, a little more rapidly than the Committee had anticipated in its August projections.’ With that said, the monthly opening range remains in focus for GBP/USD, with the pair at risk of trading on a firmer footing as both price and the Relative Strength Index (RSI) break out of the bearish trends carried over from September. 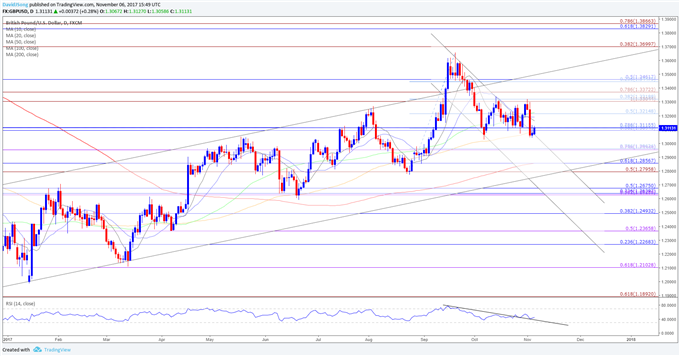 EUR/USD remains vulnerable to further losses with a slew of European Central Bank (ECB) official schedule to speak over the coming days, and a batch of dovish rhetoric may produce headwinds for the single-currency as President Mario Draghi and Co. plan to carry the quantitative easing (QE) program into 2018.

Fresh remarks from ECB board member Peter Praet suggest the central bank will endorse a cautious tone ahead of its last 2017 meeting on December 14 as the Governing Council official argues ‘a substantial amount of monetary accommodation continues to be necessary to secure the gradual convergence of inflation towards our inflation aim.’ With that said, the President Draghi and Co. may keep the door open to further support the monetary union as the ‘net asset purchases are intended to continue at a monthly pace of €30 billion until the end of September 2018, or beyond, if necessary,’ and EUR/USD may continue to give back the advance from earlier this year as a head-and-shoulders formation continues to unfold. 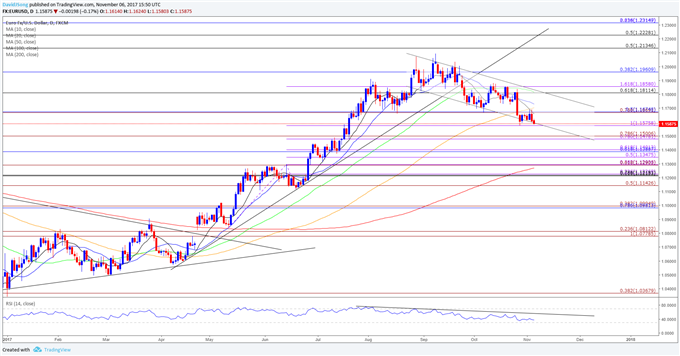