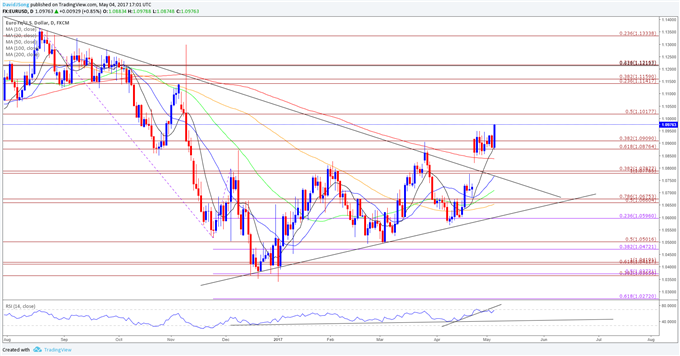 - EUR/USD Resilience Persists Ahead of NFP, Final Round of French Election.

EUR/USD outperforms its major counterparts even as Fed Fund Futures now highlight a greater than 70% probability for a June rate-hike, and the pair may continue to appreciate over the coming days as market attention turns to the final round of the French presidential election on May 7.

With that said, another lackluster U.S. Non-Farm Payrolls (NFP) report may fuel the near-term advance in EUR/USD especially as the exchange rate breaks out of a near-term range, and a Macron victory may ultimately heighten the appeal of the single-currency as it eases concerns of a euro-area breakup. At the same time, the European Central Bank’s (ECB) effort to ward off a taper tantrum may do little to weaken the Euro as the Governing Council preserves the December deadline for its quantitate easing (QE) program, and the recent developments suggest there’s a potential shift in market behavior as the EUR/USD exchange rate clears the downward trend from 2016 and holds above the 200-Day SMA (1.0838) for the first time since October.

The Australian dollar extends the decline from earlier this week as Reserve Bank of Australia (RBA) Governor Philip Lowe warns the rise in household indebtedness ‘has made the economy less resilient to future shocks,’ and the AUD/USD exchange rate may continue to give back the advance from earlier this year as the central bank appears to be in no rush to lift the official cash rate from the record-low of 1.50%. Governor Lowe added that ‘interest rates in Australia will increase’ as the economy continues to transition from the mining boom, but quickly went onto say that ‘this is not a signal about the near-term outlook for interest rates in Australia but rather a reminder that over time we could expect interest rates to rise.’ The fresh remarks suggests the RBA will continue to tame interest-rate expectations for the foreseeable future, and the bearish seasonal bias may largely pan out over the coming days as aussie-dollar carves a bearish formation following the failed test of the November high (0.7778). 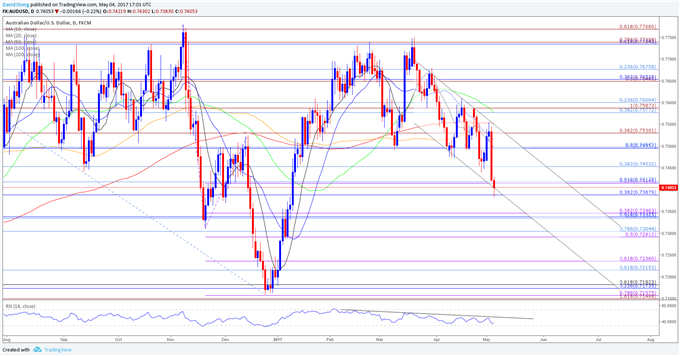