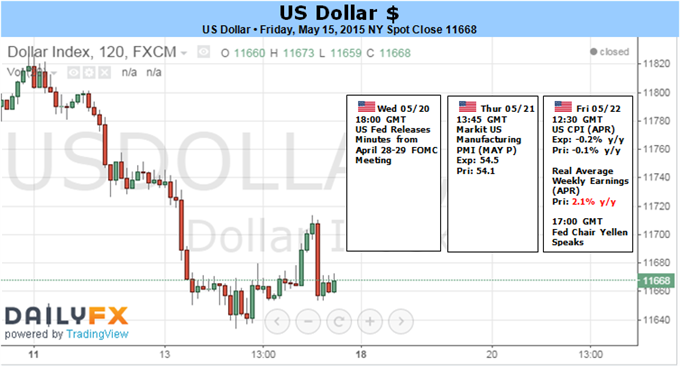 The US Dollar fell against all major FX counterparts and the DJ FXCM Dollar Index (ticker: USDOLLAR) matched its worst weekly losing streak in over five years despite a relative lack of major news. Why might the Greenback hit further lows in the days and weeks ahead?

Traders sent the previously high-flying US currency sharply lower yet again in what can best be described as a “pain trade”; the strongest currencies in Q1 have quickly become the worst performers in Q2 and vice versa. And indeed these major corrections have coincided with similarly sharp moves in commodities markets and especially crude oil prices, while global bond markets likewise have seen a large correction. The key question is simple: is there more “pain” left and will the US Dollar continue lower?

We’ll pay close attention to upcoming US Federal Open Market Committee (FOMC) Meeting Minutes as well as a key US Consumer Price Index (CPI) inflation report for the next clues on interest rates and the USD itself. FOMC Minutes should shed further light on whether officials have scaled back plans to raise interest rates given clear weakness in Q1 GDP growth figures and consumption data. April CPI inflation numbers could likewise shift market sentiment on rate hikes—particularly as current consensus forecasts call for the second-consecutive month of a year-over-year declines in nationwide prices. Major surprises in either the FOMC or CPI events would likely drive significant US Dollar volatility.

Whether or not the Dollar continues lower may ultimately depend on whether the current wave of position-covering is over. Recent CFTC Commitment of Traders data shows that large speculative traders decreased their Euro-short positions for the third-consecutive week, and the same data shows that speculators were still very heavily short. In other words: positioning figures suggest that there is certainly scope for continued US Dollar weakness. And indeed a break of critical volume-based support levels leaves us watching for further Euro and Sterling gains.

It will likely take important positive surprises out of FOMC Minutes and/or CPI results to force a meaningful US Dollar bounce. Until then, we’re keeping a close eye on key technical levels as the Greenback quickly goes from FX market leader to laggard.