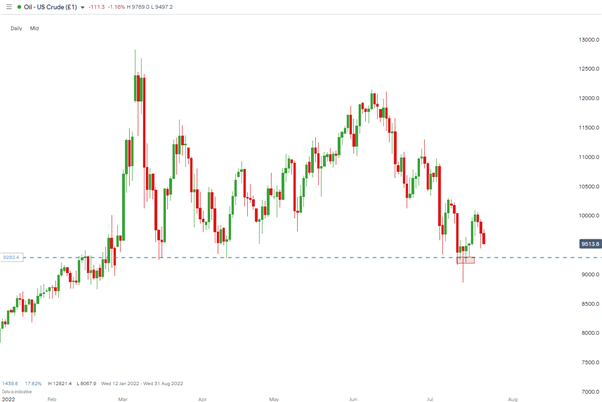 WTI has continued to trade lower, providing some relief for US motorists at the pumps. The national average for gas prices sits around $4.419 per gallon with 8 states under $4 and the most common price at $3.99. This is welcome news after US President Joe Biden’s rather unsuccessful trip to Saudi Arabia where he was unable to convince the delegates to increase oil supply.

WTI prices dropped even though the Energy Information Agency (EIA) revealed a decline in crude oil stocks of 446,000 when it was anticipated that there would be a stock build of 1.357 million – which is a fairly noticeable swing. Furthermore, oil prices continues to drop despite OPEC operating ever closer to maximum capacity.

Recent price action in the oil market has revealed a widening in the Brent-WTI spread after the EIA released its latest report for the week ending July 15. In the last two weeks we may have seen the effects of demand destruction in the US despite it being the summer months when driving tends to pick up, and by extension, we see an uptick in gas prices.

$5/gal said to be the price where consumers alter their driving frequency according to the American Automobile Association. The EIA report showed that gasoline demand dropped over 8% from a year earlier while prices of Brent have been supported, somewhat due to a rise in demand from Asia putting the commodity on track for its first weekly gain in six weeks. Lower demand for WTI and the uptick in Brent contributes to the widening of the Brent-WTI spread. 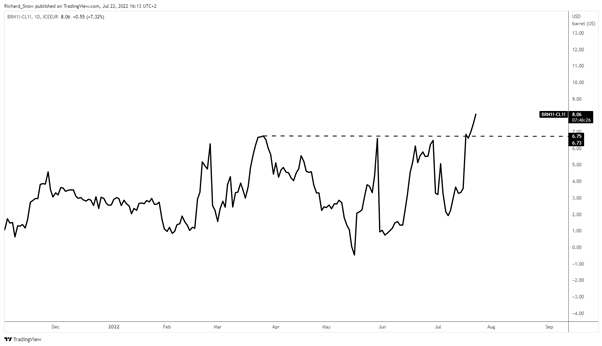 Ongoing special petroleum reserve (SPR) releases are ongoing and appear to have had some effect on fuel prices. Although, the rather sizeable declines we have seen are primarily due to global recession concerns along with inconsistent demand which have resulted from previous high prices.

On Wednesday the FOMC (the Fed’s rate setting committee) will decide by how much they are to raise the US Federal Funds Rate with markets expecting 75 basis points. Continuing to hike into weakness could add to recession fears and result in demand being revised lower along with oil prices.