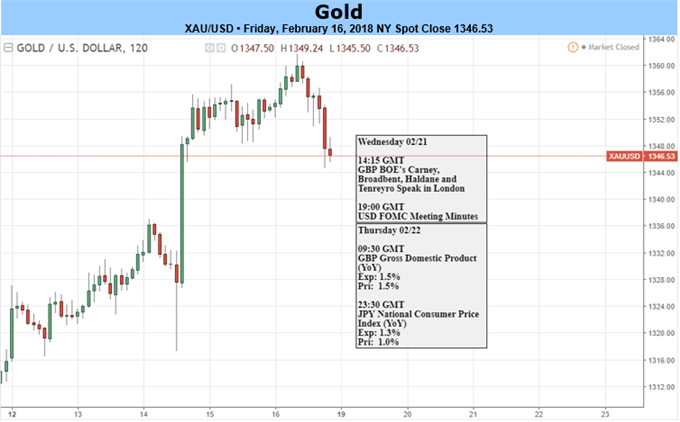 Gold prices are on pace for the largest weekly advance since August and snaps a two-week losing streak with the precious metal rallying more 2.8% to trade at 1353 ahead of the New York close on Friday. The gains comes alongside a continued rebound in equity markets with all three major U.S. indices trading higher by more than 4% on the week.

A strong print on the U.S. January Consumer Price Index (CPI) on Wednesday saw gold prices rally to fresh weekly highs with the advance paring all of the early-February losses. The recent uptick in the inflation outlook has fueled expectations that the Federal Reserve may have to hasten the pace / scope of future rate hikes with Fed Fund Futures now pricing an 83% likelihood for a hike in March. Still, yields have struggled, trading well-off fresh yearly highs late in the week.

Last week we postulated that, “Gold is caught in a tug-of-war from a fundamental standpoint. An increase in inflation expectations would typically be supportive but the focus on how this may impact the path for monetary policy continues to outweigh sentiment.” Despite this week’s strong CPI release, price action was a clear indicator that sentiment may have shifted with the U.S. Dollar coming under considerable pressure as traders piled into gold.

That said, the inflationary outlook may reignite demand for the precious metal as a store of wealth and a hedge against capital delusion. Underlying this backdrop are a continued rise in U.S. Treasury yields with the 10-year note testing multi-decade resistance. From a technical standpoint however, gold has carved out a well-defined yearly opening range within the broader uptrend with prices trading just below the range highs into the close of the week. 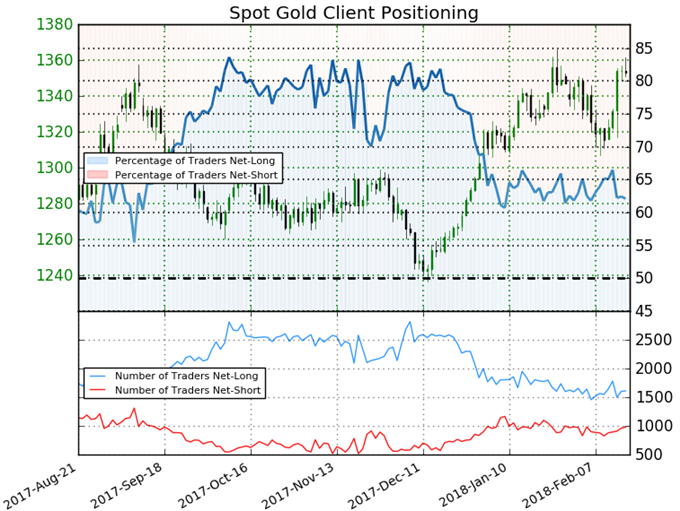 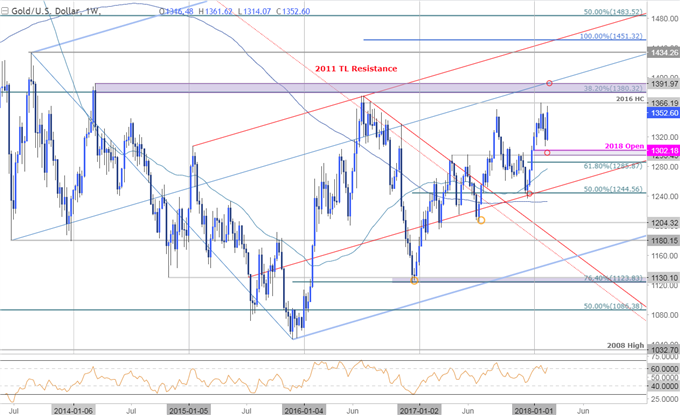 Gold prices turned just ahead of highlighted support noted last week at 1295-1302 with the rally failing just ahead of the January high / 2016 high-day close at 1366. Critical resistance remains up at 1380/92 where the 2014 high and 38.2% retracement converge on the median-line of the 2013 broader pitchfork formation (blue). 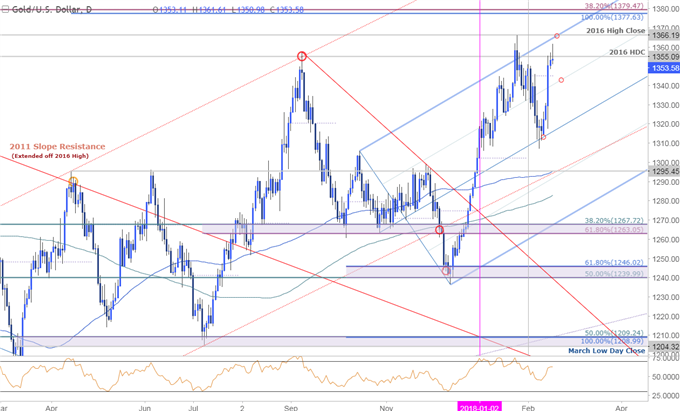 This week’s rally takes the bullion prices through the February open / opening-range highs and while this would be regarded as a bullish signal, price continues to hold within the broader January range with slope resistance further highlighting the 1366 threshold. Interim support is eyed back at the 50-line (currently ~1340s) with bullish invalidation now raised to the February low-day close at 1318. Note that weekly momentum looks a bit tired here and suggests the immediate advance may be vulnerable into the extended holiday weekend. 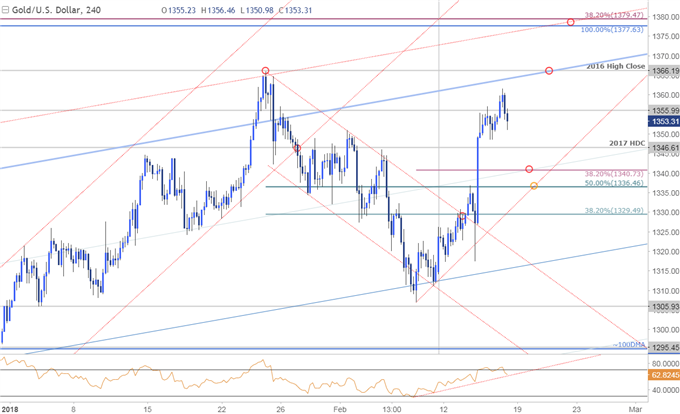 A closer look at gold sees prices turning just ahead of slope resistance on building momentum divergence (note the pending support trigger). Look for interim support targets at 1340 on this pullback with near-term bullish invalidation at the highlighted confluence at 1336.

Bottom line: Expect some pullback early in the week and IF this rally has legs, declines should be limited to basic trendline support extending off the late January low. A breach above 1366 targets subsequent resistance objectives at 1378/79.