Gold prices marched higher for a fourth consecutive week with the precious metal up 0.86% to trade at 1207 ahead of the New York close on Friday. Sustained weakness in the greenback continued to offer support for bullion which held near two-month highs as all the world shifted its attention to the inauguration of the 45th President of the United States. The technical & fundamental picture remains precarious near-term and although prices look due for a set-back, the broader outlook remains unchanged.

Heading into next week, traders will be closely eyeing the release of US 4Q GDP figures on Friday. Consensus estimates are calling for an annualized print of 2.2% q/q, down from 3.5% q/q. Keep in mind that interest rate expectations remain firmly rooted for the second half of the year with Fed Fund Futures citing a 74% chance for a hike at the June meeting. However, with the inauguration of a new president and a more ‘business friendly’ administration expected to take the reins, markets may take more cues near-term by the first few days of the Trump presidency. From a trading standpoint, while the broader focus remains constructive, the advance remains vulnerable heading into the last full week of January trade. 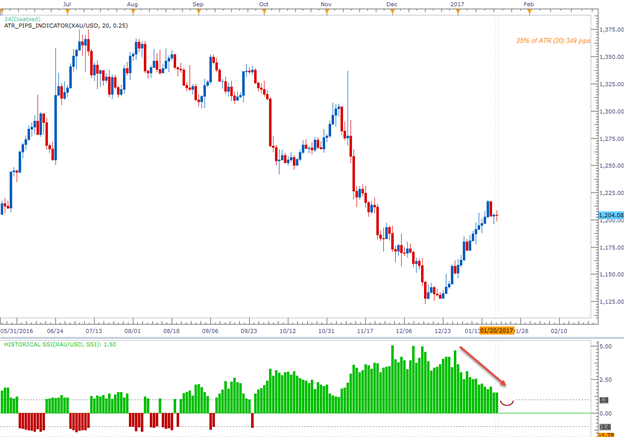 A summary of the DailyFX Speculative Sentiment Index (SSI) shows traders are net long Gold- the ratio stands at +1.51, down from 1.66 last week. It’s important to note that “SSI has continued to narrow from the 2016-extreme of +5.02 and has been accompanied by a marked change in price behavior.”

Note that the ratio is now approaching more neutral levels and highlights the risk of a near-term pullback in price. It’s too early to tell if this will develop into a more significant turn, but for now, the risk is for a correction lower while below resistance. That said, I’ll be looking for a continued build in short exposure / a flip to next short to suggest that a broader, more significant low is in place. 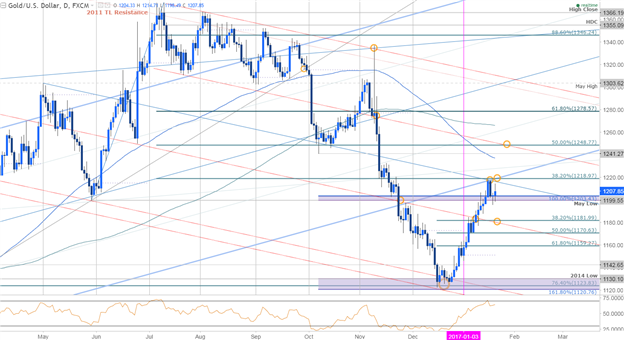 Last week we noted that "Heading into next week, things get a bit dicey for gold. We can’t rule out a run on critical confluence resistance just higher at 1218, but we’ll generally be looking for an exhaustion pullback in prices with near-term support eyed at 1182.” The outlook / levels remain unchanged. I would be looking for a pullback next week to offer more favorable long entries with a break below interim support at 1200 targeting highlighted confluence slope support at 1182. A breach eyes longer-term resistance targets at 1238/41 & 1248.