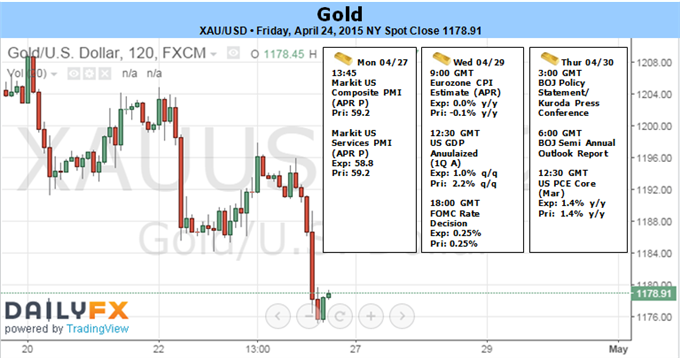 Gold Plummets Alongside USD Ahead of FOMC- Key Support 1173

Gold prices fell for a third consecutive week with the precious metal off more than 2.17% to trade at 1177 ahead of the New York close on Friday. The decline marks the largest weekly loss in seven as equity markets probed fresh record highs alongside a pullback in the dollar. Bullion looks to close the week just above key near-term support with major US data on tap next week.

Heading into next week, traders will be closely eyeing key US event risk with the release of 1Q Advanced Gross Domestic Product (GDP) & the FOMC policy decision on Wednesday. Consensus estimates are calling for an annualized read of 1.0% for the first quarter, down from 2.2% in 4Q. The GDP report may ultimately fall short of market expectations as seasonal factors are blamed for the recent batch of soft data and a set of weak prints may press the Fed to carry its highly accommodative policy stance through the second-half of 2015. As such, look for the release to impact interest rate expectations with a stronger print likely to weigh more heavily on gold.

From a technical standpoint, gold broke below slope support on Friday, opening up a decline targeting the 61.8% retracement of the advance off the yearly lows at 1173 (key support). Note that a median-line extending off the monthly high converges on this level into the start of next week and we’ll reserve this region as our bullish invalidation level with a break below risking a decline back into critical weekly support at 1150/51. Interim resistance is eyed at 1191 with a breach above 1200 needed to shift our attention back to the long-side of the trade. That said, we’ll take a neutral stance heading into next week while noting that the short bias remains at risk above keys support at 1173.