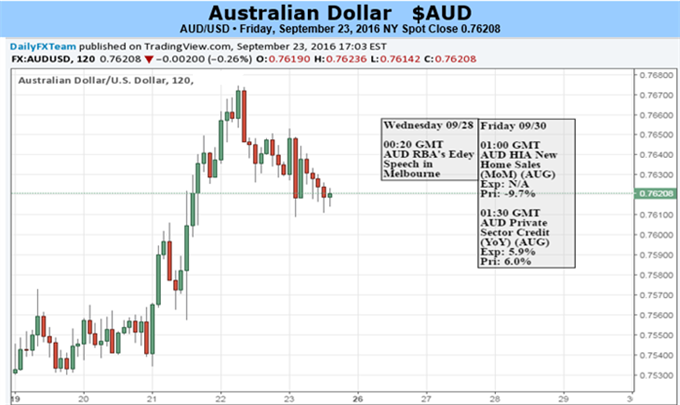 What do past AUD/USD trading patterns hint about where prices are going? Find out here.

The Australian Dollar launched an impressive recovery last week, with the lion’s share of gains coming in the wake of the FOMC monetary policy announcement. A flattening of the projected rate-hike path buoyed risk appetite and sent the sentiment-linked currency higher despite unmistakably hawkish rhetoric from Fed Chair Yellen, who all but promised tightening in December (as expected).

Another quiet week on the domestic front keeps Fed policy bets in focus from here, with extensive commentary from central bank officials due to cross the wires. Remarks from Yellen will take top billing as she testifies before the House Panel on Panel on Banking Supervision. A slew of other speeches from eight regional branch Presidents, two Governors and Vice Chair Fischer are also on the docket.

The US economic calendar will offer plenty of data flow to fuel policy bets as well. Most notably, the final revision of second-quarter GDP figures is expected to see the annualized growth rate upgraded to 1.3 percent while the Fed’s favored core PCE inflation gauge shows inflation accelerated to a six-month high of 1.7 percent in August.

Taken together, all this bodes ill for the risk- and yields-sensitive Australian unit. The promise of a gentler tightening cycle in 2017-18 seems like the Fed’s way of learning from mistakes made in 2016, with policymakers opting to under-promise and over-deliver versus the alternative. If the economy develops as officials expect, a steeper incline may yet emerge in practice.

In the meantime, skeptical investors put the priced-in probability of tightening in December at just 55.4 percent. This leaves ample room for strengthening conviction to have a meaningful impact on asset prices if Fed-speak remains hawkish and economic data complies.

The voting pattern at last week’s FOMC meeting seems to nearly assure the former. As for the latter, Yellen’s assertion that things need only remain the same between now and the end of the year to warrant a hike keeps the bar relatively low. On balance, this hints the Aussie may find its way lower anew as the prospect of nearing stimulus withdrawal weighs on risk appetite and drives an adverse shift in yield spreads.