The US Dollar Index (DXY) has been stuck under the 200-Day SMA (92.21) as the 10-Year Treasury yield slips to a fresh monthly low (1.53%), and recent market dynamics may keep the Greenback under pressure as the economic docket remains fairly light ahead of the Federal interest rate decision on April 28.

despite the 9.8% rise in US Retail Sales, and the data prints on tap for the week ahead may do little to influence the Greenback as the Federal Open Market Committee (FOMC) appears to be on track to retain the current path for monetary policy. 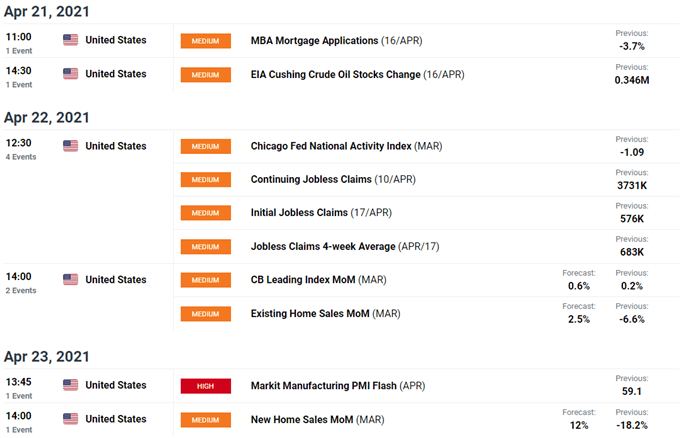 The depreciation in the US Dollar comes as Fed officials emphasize a dovish forward guidance, and recent remarks from Vice Chair Richard Clarida suggest the central bank is on a preset course as the permanent voting member on the FOMC insists that “policy will not tighten solely because the unemployment rate has fallen below any particular econometric estimate of its long-run natural level.”

It seems as though the FOMC will continue to utilize its emergency tools even though the US economy adds 916K jobs in March, and a further decline in Treasury yields may keep the Dollar under pressure as the central bank stays on track to ““increase our holdings of Treasury securities by at least $80 billion per month and of agency mortgage-backed securities by at least $40 billion per month.” 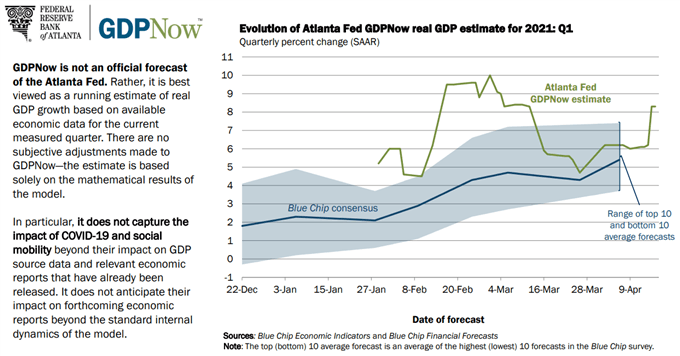 However, signs of a stronger recovery may put pressure on the FOMC to change its tone as the Atlanta Fed’s ‘GDPNow model estimate for real GDP growth (seasonally adjusted annual rate) in the first quarter of 2021 is 8.3 percent on April 16,’ and it remains to be seen if Chairman Jerome Powell and Co. will alter the forward guidance in 2021 as the central bank attempts to achieve above-target inflation.

Until then, recent market dynamics may continue sway the US Dollar as the economic docket remains fairly light ahead of the next Fed rate decision, and DXY may continue to hold below the 200-Day SMA (92.21) amid the ongoing weakness in longer-dated US Treasury yields.