Euro May Look Past PMI Data as French Election Looms

The preliminary set of April’s Eurozone PMI figures headlines the economic calendar in European trading hours. The region-wide composite measures is expected to show the pace of manufacturing- and service-sector growth held at the six-year high set in March. The outcome can hardly be expected to boost the Euro however as the ECB remains committed to a dovish posture and the French presidential election looms ahead.

Indeed, the Yen edged up overnight, seemingly buoyed as traders remain jittery about first-round voting set for this weekend. The four leading candidates are worryingly close in the polls, meaning the possibility of a runoff between two eurosceptic candidates – Marine Le Pen from the right and Jean-Luc Melechon from the left – is uncomfortably high.

The Japanese unit’s gains look somewhat out of place against a backdrop of seemingly improving sentiment. Most Asian shares followed Wall Street higher. European and US index futures suggest more of the same is on tap when those bourses come online. Such restraint from the standby anti-risk asset in the G10 FX space may yet prove telling.

The New Zealand Dollar fell as CoreLogic – an analytics firm – said “demand has significantly weakened” in the local housing market in April. The currency fell alongside front-end bond yields, hinting that traders may have interpreted the news to mean that ebbing froth in the buoyant real estate space may portend a more accommodative RBNZ posture. 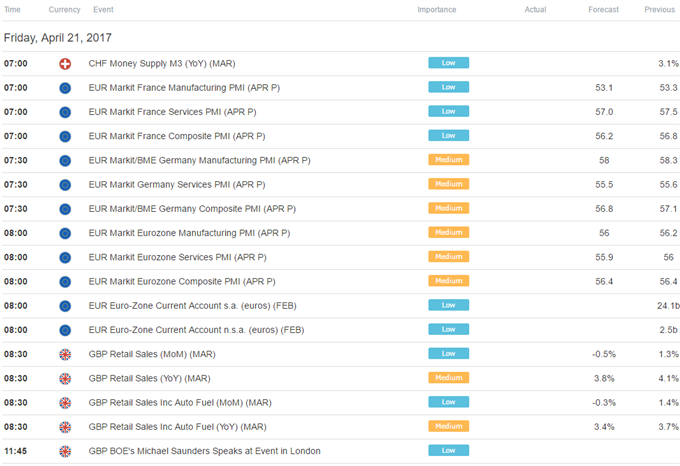