- Central Bank meetings from the U.S. and the U.K. over the past 24 hours have produced little by way of new information.

- The prior themes of USD-strength and GBP-strength have come into question with bearish price action in response to these Central Bank meetings; but Non-Farm Payrolls is tomorrow.

Ahead of yesterday’s Fed statement, we looked at the precarious state of current price action in the U.S. Dollar. After a rip-roaring run in the 4th quarter of last year, the Greenback came into 2017 at 14-year highs, driven by anticipation for tighter monetary policy in the United States; aided, at least in part, by the promise of fiscal policy expansion that could further support growth in the U.S. economy.

As we entered the New Year, that bullish trend in the U.S. Dollar began to re-trace, and once President Trump was inaugurated on January 20th, a series of executive actions has collectively served to cloud the picture around both of the above mentioned bullish drivers. President Trump has talked about currency values, specifically mentioning the Euro as over-valued; and President Trump has also made numerous allusions to economic policy. This is a rather new driver for global capital markets, as never in history has a President been so involved or observant of day-to-day market behaviors.

In yesterday’s FOMC statement, the bank continued to say that they saw near-term risks as being roughly balanced, and that there has been continued improvement in the labor market while economic activity has continued to expand at a moderate pace. If this sounds familiar, it should; because this is practically the same thing that the Fed has been saying at meetings for the past two years, with minor adjustments and tweaks here and there.

But what may have been most puzzling is the fact that the Fed did not seem to acknowledge the recent burst of strength that developed after the U.S. Presidential Election. There was little increased optimism nor were any growth or inflation targets denoted as needed for adjustment; and deductively this might’ve been interpreted by markets as the Fed not being believers in the ‘reflation trade’ driven by the prospect of robust fiscal policy expansion. The next Fed meeting is mid-March, but the next rate move isn’t expected until the June meeting. So it appears as though there may be some ‘slack’ for that up-trend in the U.S. Dollar until the next Fed meeting.

Regarding U.S. Dollar drivers – tomorrow morning brings on Non-Farm Payrolls, and the U.S. Dollar is very weak as we head into the release. On the chart below, we’re looking at near-term price action in the Greenback as the currency attempts to dig-out of a big zone of long-term support. 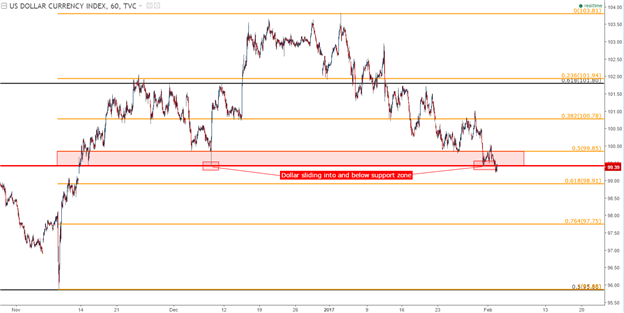 On the below chart, we dial in to look at this recent slide below support; and noticeable is the fact that sellers have been unable to create significant drive below this prior support zone. 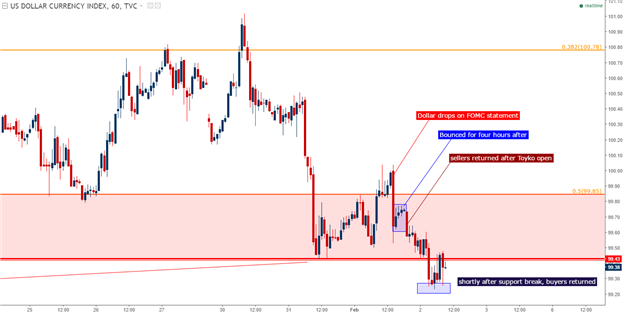 This morning saw another ‘Super Thursday’ from the Bank of England, and while the bank adjusted growth forecasts significantly higher, expecting 2017 GDP to rise by 2% now as opposed to the prior expectation of 1.4%, set in November; they also remained rather calm on the prospect of ‘inflation overshoots.’ And while the BoE adjusted growth forecasts for 2017 higher by a full 42% (to 2% from 1.4%), inflation forecasts were adjusted-lower, to 2.7% from the prior 2.8% for 2017 while 2018 remained unchanged at 2.8%.

The net thus far has been Sterling weakness as the prospect of a potential rate hike in response to rising inflation looks a bit less-likely given these tamed inflation forecasts. But the increase to growth forecasts is rather large, and we’ll likely see this theme filter through price action in the coming days. On the hourly chart below, we’re looking at this recent reaction in GBP/USD after the one-two combo of the Fed and BoE. And while USD weakness-post Fed drew new 7-week highs into Cable, this morning’s BoE event helped to bring price action right back down to support. Current support is showing at the 50% Fibonacci retracement of the most recent major move, taking the high from September 22nd down to the low of January 16th. 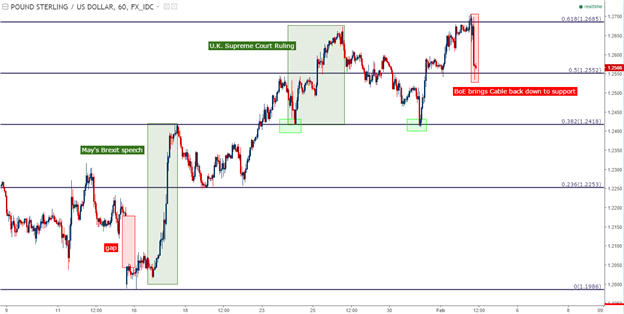