- The S&P 500 had a huge day on Monday, but has found near-term resistance at that familiar 2,065 level and off of the top-side of the bull-flag formation that we’ve been discussing (chart below).

Over the past few weeks, we’ve been discussing some of the interesting events taking place in markets that may be exhibiting that a turning point, of some type. Just last week, we looked at the downward channel that had developed on the S&P 500 as a December Rate hike became a very realistic probability. The bull flag that had formed as prices moved lower on the S&P will often be indicative of a trend-continuation pattern. As in, when a downward sloping channel forms in a strong up-trend, traders generally want to wait for the channel to break before triggering in either direction. And because the ‘bigger picture’ trend is moving higher, the typical break is above the channel. But that’s not what we had on the S&P, as risk aversion continued to pick as December got more priced-in, and Monday of this week we looked at how that presented a bearish tone in the S&P. 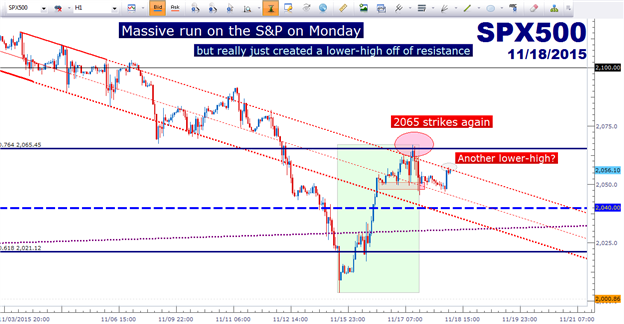 But stocks have come back with gusto thus far on the early week, and we’ve actually seen price action move back into that down-ward channel on the S&P to test resistance of the upper trend-line of the channel. This presented the ‘everything is going to be ok’ picture, as we were seeing stocks go up with rate expectations for December stayed relatively strong. But all was not well around-the-world: While stocks were continuing to rise, Metals were continuing to bleed. We looked at a very key commodity market in Copper yesterday, in trying to discern what the massive drop in Copper prices might be telling us about global growth. 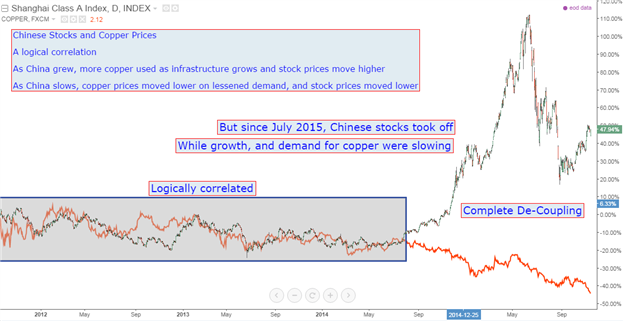 But Copper isn’t the only commodity market facing considerable pain. The same can be said for Oil, which just touched off of the psychological $40/barrel level, and Gold just put in a new five-year low. We discussed this jaw-dropping move in Gold in an article yesterday entitled, The Carnage Continues in Gold Prices, and You Have 3 Choices. 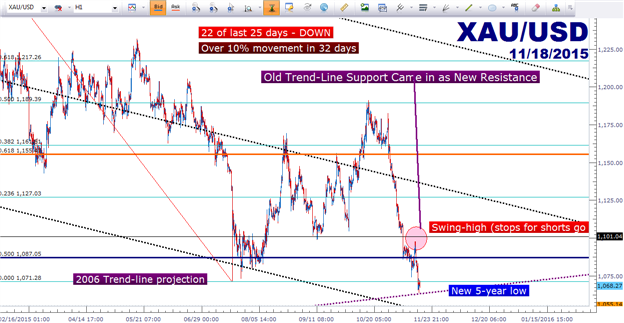 This divergence between stock prices and commodity prices is troubling. Mainly, because it’s unlikely that one asset class continues to inflate so heavily while another deflates so quickly. As we said yesterday, something will likely give, at some point. Either stock prices come down to reflect slower growth prospects, or commodity prices move back up to illustrate strong consumption and more brisk growth rates.

But as we said yesterday – in these situations of analysis, it’s important to separate what we ‘know’ from what we ‘think.’ And just last night, we got a little bit more information that we can chalk up into the ‘know’ column.

At the Asia-Pacific Economic Cooperation Chief Executive’s Summit in Manilla, President Xi made a rare remark of weakness for the Chinese economy. President Xi said that China “is still coping with the complicated internal and external environment, considerable downward pressure and the temporary pain of deep reforms.”

For an economy that just recently gained the implicit approval of the IMF to join the SDR-basket (which may mean that they could be hamstrung with future intervention activities) this could be a troubling prospect.

Perhaps more to the point – this may raise the ire around that December rate hike, as the prospect of triggering a long-running rate tightening cycle while the largest economy in Asia faces ‘considerable downward pressure’ may be enough to create further risk aversion from investors. As we’ve been stating in these Market Talks for the past couple of months, the big scourge of investor concern doesn’t seem to be directly centered on China, but rather around the Federal Reserve as they’ve provided a vexing environment for investors to attempt to navigate. And after two rather severe ‘corrections’ over the past 15 years (first the tech bust, then the financial collapse), investors are rightfully gun-shy of carrying on too much risk. But that’s the opposite of what ZIRP (Zero Interest Rate Policy) does. ZIRP means investment returns on ‘safer’ issues like bonds are significantly lower, meaning that investors will need to take on riskier allocations in their portfolio to actually find any growth. And with a constantly ascending stock market, this isn’t necessarily a bad thing as this more aggressive allocation can allow for bigger returns.

But when stock markets are constantly going up, this overly-aggressive investment allocation becomes a huge problem. This is what can create risk aversion. Markets are built on confidence, and with the Fed becoming more of a problem for investors than a solution, the potential for risk-off ‘panic’ moves increases greatly.

Just put yourself in the shoes of an investor that’s seen two major bear markets over the last 15 years. After building that nest egg and getting closer to retirement, you see swings of 10% or more in a month in your net worth, and you remember only 7 years ago when you had to take a 50% haircut because the housing bubble collapse. Or just 7 years before that, you had to take a 40% hit when the tech bubble burst.

Would you really wait around to see the next big bear market and lose 10, 15 or 20%? Or would you look for safety the second that the alarm bells started sounding?

That’s something that we may know a little more about today after President Xi’s comments in Manilla. The alarm bells are sounding. This is further evidence that China is slowing down, and coupled with the continued bleeding in commodity prices, the global economy is not on stable footing.