- All Three Preferred Measures for Core Inflation Slowed in November.

Canada’s Consumer Price Index (CPI) may derail the near-term advance in USD/CAD as the headline reading is projected to climb an annualized 1.7% in October, but a further slowdown in the three preferred measures for core inflation may dampen the appeal of the Canadian dollar as the Bank of Canada (BoC) endorses a dovish outlook for monetary policy.

The BoC looks poised to retain the current policy for the foreseeable future as the central bank pledges to ‘assess the impact of ongoing developments, mindful of the significant uncertainties weighing on the outlook,’ but Governor Stephen Poloz and Co. may keep the door open to further support the real economy as the central bank warns ‘inflation in Canada has been lower than anticipated since October.’ That said, another weaker-than-expected CPI print may fuel the near-term rebound in USD/CAD, and the central bank may continue to cast a cautious outlook for the region as ‘new measures of core inflation are all below 2 per cent presently, weighed down by excess capacity in the economy.’

Increased consumption paired with the pickup in business sentiment may boost consumer prices, and a stronger-than-expected CPI reading may curb the recent rebound in the dollar-loonie exchange rate as it dampens speculation for additional monetary support.

However, easing input costs accompanied by the slowdown in private-sector credit may drag on price growth, and another weak inflation print may spark a bearish reaction in the Canadian dollar as it puts increased pressure on the BoC to further support the real economy. 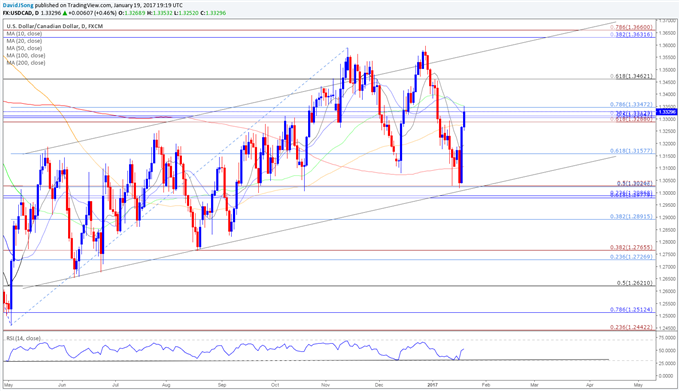 Consumer prices in Canada grew an annualized 1.4% in November following a 1.5% expansion the month prior, with the slowdown largely driven by a 4.3% decline in gasoline prices. At the same time, prices for clothing for clothing and footwear narrowed 2.1% in November, with transportation costs also narrowing 1.2%, while prices for food bounced back 0.5% during the same period. The Canadian dollar struggled to hold its ground following the dismal print, with USD/CAD preserving the losses throughout the North American trade, with the pair ending the day as 1.3480.