- ISM Non-Manufacturing Survey to Increase to 54.8- Highest Since December 2015.

Another pickup in the ISM Non-Manufacturing survey may heighten the appeal of the greenback and spark a larger pullback in EUR/USD as it raises the outlook for growth and inflation.

Despite the ongoing 9 to1 split within the Federal Open Market Committee, Chair Janet Yellen and Co. may come under increased pressure to further normalize monetary policy at the next quarterly meeting June especially as the U.S. economy approaches ‘full-employment.’

The expansion in housing accompanied by the pickup in private-sector credit may boost service-based activity, and a positive development may generate a bullish reaction in the greenback as it boosts interest-rate expectations.

Nevertheless, the slowdown in household spending may largely weigh on economic activity, and an unexpected downtick in the ISM survey may weigh on the U.S. dollar as market participants push out bets for the next Fed rate-hike. 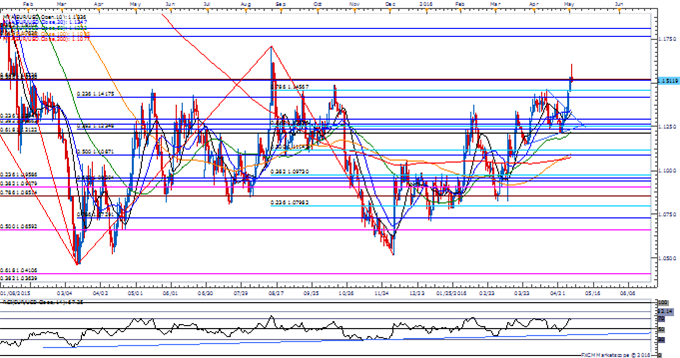 The ISM Non-Manufacturing survey beat market expectations in March, with the index advancing to 54.5 from 53.4 in February. A deeper look at the report showed the gauge for business activity advanced to 59.8 from 57.8 to mark the highest reading since October, while the Employment component climbed to 50.3 from 49.7 during the same period. Despite the better-than-expected reading, the initial downtick in EUR/USD was short-lived, with EUR/USD climbing back above the 1.1350 region to end the day at 1.1379.