For a few days, Brexit and the US-China trade war are out of the collective focus of markets participants. News over the weekend that Abqaiq, Saudi Arabia’s largest oil processing facility, was attacked in a missile strike by thus far unknown drones, has crippled over 5% of the global oil supply.

With an uncertain timeline for bringing Saudi Arabia’s process capabilities back online, and OPEC and Russia refusing to step up production, the threat of a near-term supply imbalance has sent oil prices exploding higher at the start of the week. At the time this note was written, crude oil prices were up by more than 14% from the close on Friday, September 13.

While the Canadian Dollar initially benefited from the surge in oil prices, sharply higher energy prices constitute a sudden shock to the global economy.Gains that would otherwise accrue during normal trading conditions among the commodity currencies have been tempered. Indeed, whereas prior to the weekend’s events G10 currencies’ central banks were seeing their rate cut odds drop steadily, traders now think the odds are rising of more accommodative policy action on a sooner time horizon. 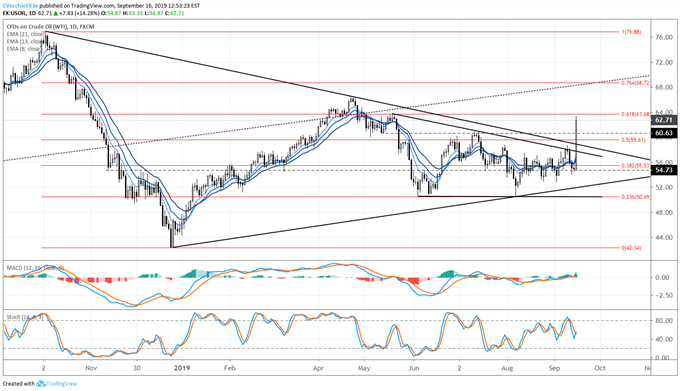 In our last crude oil technical forecast update, it was noted that “prices may be consolidating in a descending triangle since early-May 2019. To this end, there is little clarity on the next move for crude oil prices; traders should be open to both bullish and bearish outcomes.” The bullish outcome is now favored given the gap open higher after the weekend.

Crude oil prices are well-established above their daily 8-, 13-, and 21-EMA envelope, while both daily MACD and Slow Stochastics have turned higher in bullish territory. Now that triangle resistance in the form of the descending trendline from the October 2018 and April 2019 highs has been broke, crude oil prices are eying the 61.8% retracement of the 2018 high/low range at 63.68. 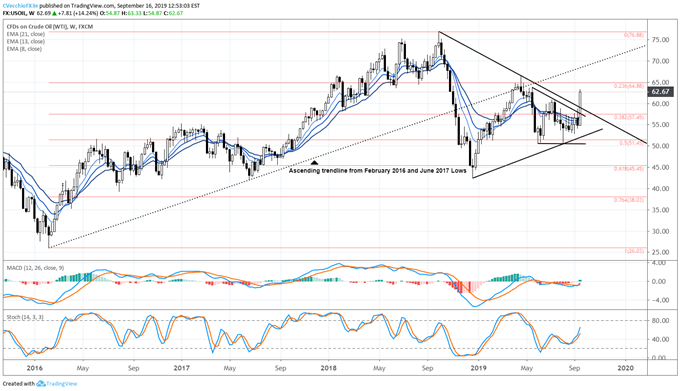 The break of both the descending triangle in place since the start of May 2019 and the symmetrical triangle in place since the end of September 2018 is apparent on the weekly timeframe. Crude oil prices are firmly above the weekly 8-, 13-, and 21-EMA envelope. Meanwhile, weekly MACD and Slow Stochastics have turned higher; the former is nearing a cross over the signal line into bullish territory, and the latter is already trending higher in bullish territory. Ultimately, a return back to the ascending trendline from the February 2016 and June 2017 lows later this year can’t be ruled out. 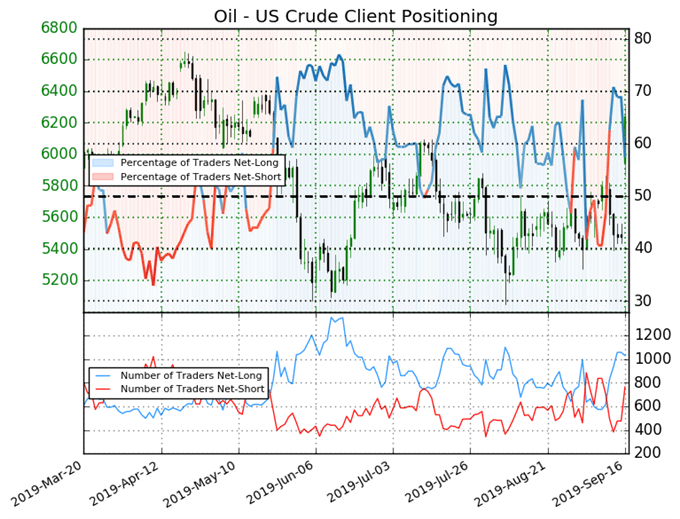 We typically take a contrarian view to crowd sentiment, and the fact traders are net-long suggests crude oil prices may continue to fall. Positioning is less net-long than yesterday but more net-long from last week. The combination of current sentiment and recent changes gives us a further mixed crude oil price trading bias. 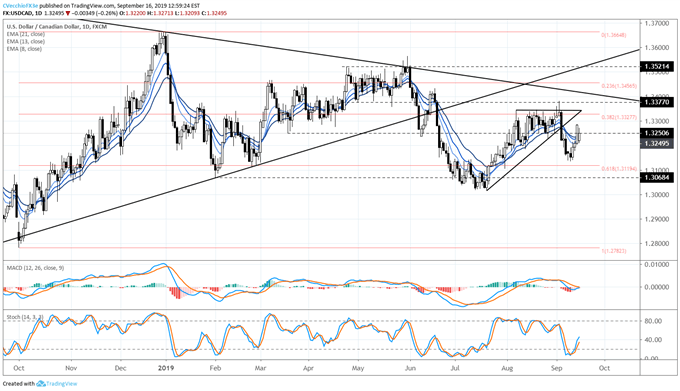 USDCAD rates gapped lower to start the week as the surge in crude oil prices helped triggered correlation program traders. But while a slow, steady rise in oil prices is generally seen as a positive development for the Canadian economy given its approximate 11% dependence on the energy sector, a sudden shock rise in oil prices is not seen as a positive in any regard. If market sentiment shifts back towards concern about a global economic slowdown, the Canadian Dollar will have trouble benefiting from higher oil prices.

For now, USDCAD rates remain above their daily 8-, 13-, and 21-EMA envelope. Daily MACD has arrested its decline and is turning higher at the signal line. Meanwhile, Slow Stochastics have moved up into bullish territory. The path of least resistance is tentatively higher for USDCAD rates; a move back above 1.3300 shouldn’t be ruled out. 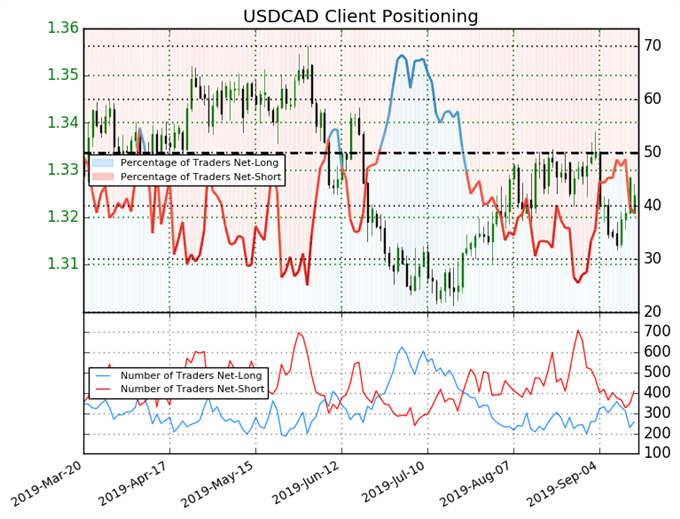