DXY Index Continues Push High on Back of EUR/USD Weakness

- Weak German ZEW data coupled with more hopes of avoiding a no deal, ‘hard Brexit’ outcome have led the Euro lower and the British Pound higher on Tuesday.

- The US government shutdown has entered day 32, and no end is in sight as neither US President Trump nor Congressional Democrats appear willing to budge from their entrenched demands.

- Retail traders are fading the US Dollar rally more aggressively, suggesting that it may still have legs yet.

The US Dollar (via the DXY Index) continues to nudge higher on the first full trading day of the week, with traders continuing to downplay the impact of the US government shutdown on the economy (“no news is good news”), even as the shutdown drags into day 32. But with the US-China trade negotiations ongoing, geopolitics beginning to rear its head again, Brexit reaching a boiling point, and political instability slowing creeping across Europe, the US Dollar is simply enjoying its place as ‘the least worst option.’

The Shape of Brexit

UK Prime Minister Theresa May has presented her ‘Brexit Plan B’ to parliament and reactions have been tepid at best. It seems that the prime minister’s renewed effort to get her deal through the House of Commons differs little than her first attempt, and by judging from the reaction of parliamentarians, it seems doubtful that ‘Plan B’ will pass muster either if a vote is held by the January 29 deadline. Reports over the weekend indicated that UK PM May might attempt to renegotiate the Good Friday Agreement, a politically fraught endeavor that would undoubtedly add a new matrix of complexity to an already overbearing Brexit problem.

At this point, if a no deal, ‘hard Brexit’ is to be avoided, it would appear that an extension beyond the March 29, 2019 deadline may be necessary. However, with the European parliamentary elections due up in July, it’s doubtful any extension to the Brexit deadline would go beyond there. Late on Monday, cross-party talks produced a bill designed to thwart a no-deal, ‘hard Brexit’ scenario by forcing PM May to postpone Brexit if no deal were reached by February 26.

Among the only important economic data due out on Tuesday, the January German ZEW Survey proved disappointing, with the Current Situation coming in at +27.6 versus +43.3 expected. The weakest reading in four years confirms the deterioration seen in proximal growth trackers like the PMI surveys. While a recession isn’t in the cards yet, evidence is starting to build that Germany, alongside the rest of the Eurozone, is seeing growth prospects cool off.

Speaking of PMIs, before the ECB meeting on Thursday, the preliminary January Eurozone Composite PMI is due in at 51.4 from 51.1, a modest improvement but nothing that should inspire much confidence. If anything, given the backdrop of consistent data disappointments over the past month (per the Eurozone Citi Economic Surprise Index), the risk is for the PMI readings to disappoint.

At the end of 2018, Eurozone economic data was clearly weakening, a trend that has continued thus far into the New Year: the Citi Economic Surprise Index is still deep in the red at -81.7, slightly improved from -88.6 at the end of last week, but still lower than where it was one month ago at -77.5. This is a dour backdrop for ECB President Mario Draghi and the Governing Council when they announce their January rate decision on Thursday. 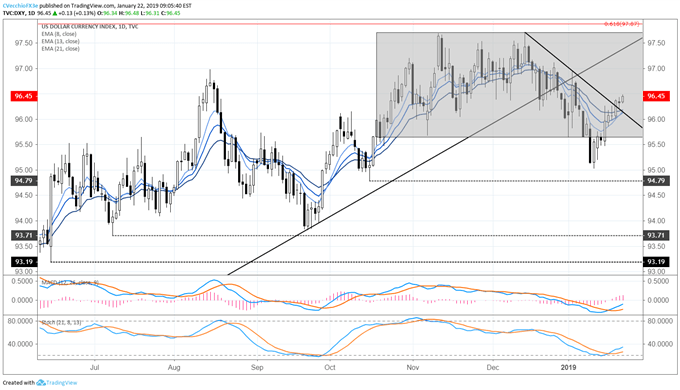 Following the holiday, the full start of the week see the DXY Index maintaining elevation above the downtrend from the December 14 and January 2 highs.Per the close at the end of last week, price is above the entirety of its daily 8-, 13-, and 21-EMA envelope for the first time since December 26; the close on Friday through the daily 8-EMA came after having failed so after failing on Tuesday, Wednesday, and Thursday. Both daily MACD and Slow Stochastics are pressing high higher (albeit still in bearish territory).

To retake the rising trendline from the April and September 2018 lows, the DXY Index would need to get back above 97.30 by the end of the coming week. To this end, more price development is needed to upgrade the assessment to fully ‘bullish,’ although no doubt the US Dollar’s near-term technical prospects have seemingly brightened.