- Faster than expected inflation in the UK has helped the British Pound stabilize across the board.

- The US Dollar has held onto its gains since Friday's November US NFP release, but traders aren't bidding up prices further ahead of the FOMC tomorrow.

- Retail trader sentiment points to continued mixed trading conditions in the US Dollar through the end of this week.

The US Dollar has been able to hold onto its gains since Friday's November US NFP report was released, but nothing else has materialized in a meaningful way since then. The news flow around the reconcilliation of the US House and Senate tax bills has been surprisingly quiet (which probably means it will make waves again some point soon), and with the December FOMC meeting due up tomorrow, there is little incentive for traders to stake out new, large positions at present time.

Fed funds have been pricing in a 100% chance of a 25-bps rate hike in December since October 26. Given that inflation readings of recent have disappointed, there seems to be a strong chance that the FOMC revises lower its 2018 inflation expectations, and thus, its glide path for interest rates. This won't surprise the market, as market expectations have deviated quite sharply from the FOMC's own (a problem for the US Dollar, but not for US equity markets).

Accordingly, there are two USD-pairs that are on the radar as we look towards the FOMC meeting tomorrow. The first, USD/CAD, has been stuck in a sideways range since the end of October between 1.2665 and 1.2910. Momentum is largely sideways, with MACD declining in bullish territory but Stochastics rising in bearish territory. While not a fan of ranges, the opportunity to play a breakout in either direction persists particularly as Fed and BOC policy horizons continue to shift. 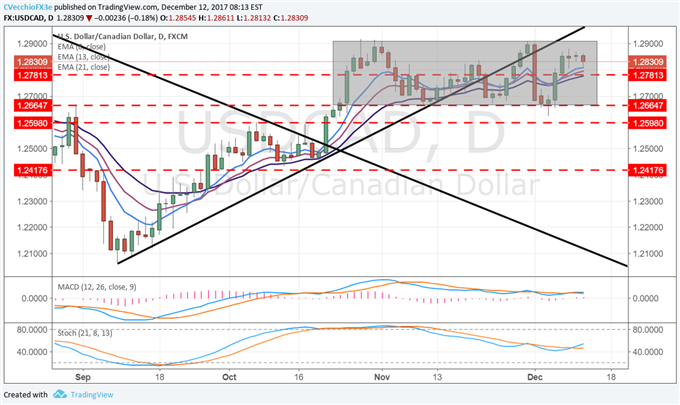 Elsewhere, we're watching GBP/USD as a return into the multi-month consolidation may be developing. Price broke out of the 1.3018 to 1.3340 range on November 29 and has not traded inside of it since then. But following a swirl of headlines that suggest UK Prime Minister Theresa May's days could be numbered despite making significant progress on several Brexit issues (much to the chagrin of hard Brexiteers), GBP/USD now threatens to break back into the range. 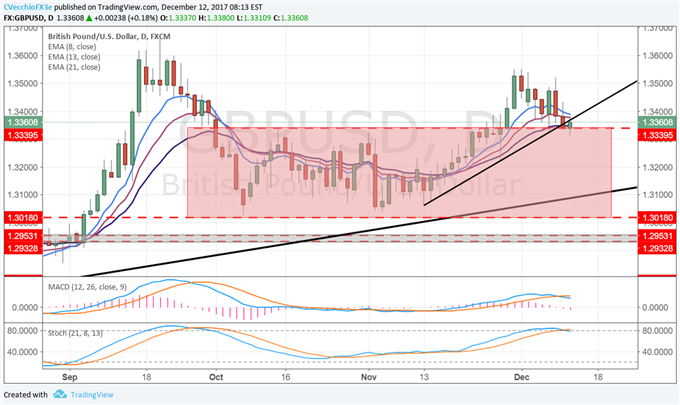 Price in GBP/USD has already started to lose the uptrend from the November 13, November 28, and December 7 lows, and but for the surprise beat on the November UK CPI report this morning, there is a strong case to be made that 1.3340 would have already been lost. If momentum fully breaks here below 1.3340, a return into the consolidation after the breakout attempt would suggest a full reversal back towards the range lows near 1.3018 could be in the cards.