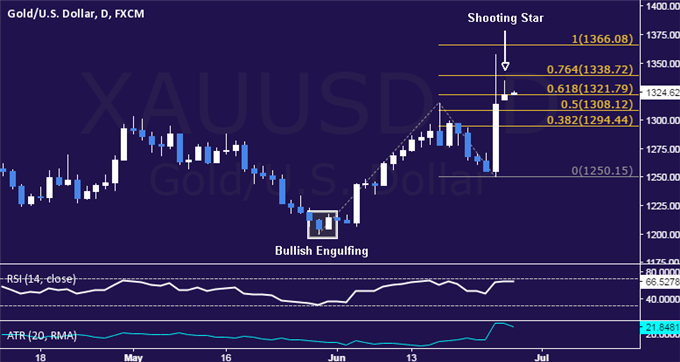 Follow-through on Brexit-inspired volatility continued to play out in the commodity markets. Crude oil prices weakened amid risk aversion, following the S&P 500 downward, while gold prices rose alongside haven assets including the Japanese Yen and the 10-year US Treasury bond.

The aftermath of the UK referendum is likely to remain in focus as the European Parliament convenes for a special session to produce an official “Brexit” resolution. EU heads of state are also gathering in Brussels for a two-day European Council meeting to discuss how to proceed after last week’s events.

Concrete specifics on the UK’s departure from the regional bloc are unlikely. Article 50 is yet to be invoked so formal exit procedures have not been triggered. The sit-down will focus on proposing a “new impulse” for the EU, according to comments from German Chancellor Angela Merkel yesterday.

Presumably, this implies a range of broad policy proposals aimed at boosting the EU’s popularity to counter Brexit-inspired eurosceptics in other member states. While it seems unlikely that the meeting will deliver much more than vague platitudes, the outcome remains a potent source of event risk for sentiment trends.

Practically speaking, the absence of fresh fodder to push forward the Brexit narrative may offer shell-shocked markets a bit of space for digestion, encouraging corrective price action across the major asset spectrum. This may see gold retrace some recent gains while crude oil recovers alongside share prices.

Are traders long or short crude oil after the Brexit vote? Find out here!

GOLD TECHNICAL ANALYSIS – Gold prices rebounded as expected but the appearance of a Shooting Star candlestick points to indecision and hints that a pullback may be in the cards. Near-term support is at 1308.12, the 50% Fibonacci expansion, with a reversal below that targeting the 38.2% level at 1294.44. Alternatively, a push above the 61.8% Fib at 1321.79 sees the next upside barrier at 1338.72, the 76.4% expansion.

CRUDE OIL TECHNICAL ANALYSIS – Crude oil prices have slumped back toward range support at 45.60, marked by the 23.6% Fibonacci retracement. A daily close below this barrier exposes the 38.2% level at 41.86. Alternatively, a reversal above the 48.73-50.18 resistance cluster sees the next upside barrier at 51.86, the 23.6% Fib expansion. 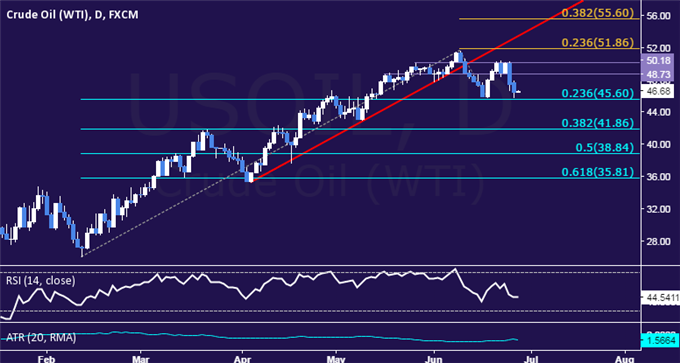