Asia-Pacific markets are eying a higher open after US stock indexes rose in New York. A drop in Treasury yields weighed on the US Dollar, stoking some risk-taking. The British Pound lost more than 1% versus the USD, falling to its lowest level since 1985. Economists are wary of measures proposed by Prime Minister Liz Truss, which include reviewing the Bank of England’s policy mandate.

EUR/USD rose above parity, although the Euro stands on a fragile economic backdrop. The European Central Bank (ECB) faces a tough path forward, given Europe’s trouble with energy ahead of the winter. In Asia, the Japanese Yen fell to a new 24-year low versus the Greenback. Policymakers may intervene in the market if the Yen’s slide continues. While Japan has an ample supply of foreign-exchange reserves, around $1.3 trillion of mostly USDs, direct intervention comes with significant risks.

The risk-sensitive Australian Dollar rose nearly 0.5% after trimming early losses that took AUD/USD near its 2022 low. Australia’s second-quarter GDP growth rate surprised analysts yesterday, with the annual rate crossing the wires at 3.6%, beating the expected 3.4% increase. The country’s trade data is due at 01:30 GMT, and traders see its surplus falling from A$17.67 billion to A$14.5 billion. Reserve Bank of Australia (RBA) Governor Philip Lowe is scheduled to deliver a speech this afternoon named “Inflation and the Monetary Policy Framework.” The Aussie Dollar has a potentially volatile day ahead.

The main risk to APAC markets comes from China and its increasing pace and breadth of lockdowns. China saw 1,570 local Covid cases for Tuesday. The megacity Chengdu extended its lockdown, although officials eased restrictions in some suburbs. Trade growth eased in August, with exports growing at a 7.1% annual pace, down from 18% in July and missing the 12.8% Bloomberg consensus forecast. Imports also missed expectations, underpinning the impact of the “dynamic Covid-zero” strategy.

WTI crude and Brent crude prices fell sharply. The American Petroleum Institute (API) reported a 3.64 million barrel build in US oil stocks for the week ending September 02. That was well above the expected 733k draw. The Energy Information Administration’s report will provide a better view of stockpiles for US oil and oil products. The primary US storage hub at Cushing, Oklahoma, has seen progress in adding inventory over the last month, with a 204k four-week average build. WTI’s prompt spread backwardation—a commonly-referenced proxy for demand strength measured by the difference between the current and next month’s contract prices—fell to 0.31.

AUD/USD remains below its 78.6% Fibonacci retracement level. Bulls bought the Aussie Dollar after prices fell within 0.5% of its 2022 low at 0.6681. But the trade's conviction appears weak, evidenced by downbeat momentum oscillators.

The Relative Strength Index (RSI) is trading below its 50 mid-point, and the MACD appears uninspired, trading below its respective centerline. If prices manage to pierce above the 78.6% Fib, the falling 9-day Exponential Moving Average (EMA) may stop the move. 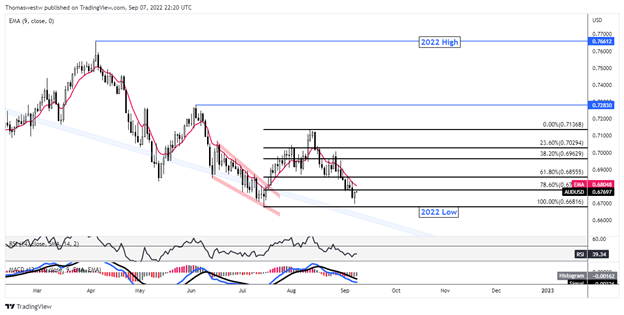