Asia-Pacific markets are facing a mixed open after stocks fell and the US Dollar gained during New York trading. The United States saw a red-hot inflation report cross the wires prior to Wall Street’s opening bell. Fed Funds Futures are pricing in an 85.4% chance for a 50-basis point rate hike at the May FOMC meeting, up from 83.8% before the US CPI report.

A rebound in oil prices reinforced inflationary fears, although the yield curve steepened overnight amid higher energy prices. The American Petroleum Institute (API) reported a big 7.7 million barrel build for the week ending April 08. That was more than 6 million barrels more than what analysts were expecting. The Energy Information Administration is set to release its report tonight for the same period. A Bloomberg survey shows the consensus estimate at +2.5 million barrels.

Chinese trade data for March is in focus as today’s potentially high-impact event. Analysts expect to see a slowdown in export growth, which is likely to weigh on China’s trade surplus. The war in Ukraine and resulting sanctions may have tempered the global appetite for Chinese goods. Import growth is also seen slowing due to the ongoing lockdown in Shanghai, now in its third week. The Bloomberg consensus estimate is at $21.70 billion. A smaller figure may weigh on the Australian Dollar.

The Reserve Bank of New Zealand (RBNZ) is set to release its April rate decision at 02:00 GMT. The New Zealand Dollar may rise against its peers if policymakers opt for a larger 50 bps rate hike, although the consensus estimate calls for a 25-bps hike. The war in Ukraine and China’s Omicron outbreak may lead the RBNZ to go at a slow and steady pace for now even as broader inflationary pressures persist.

AUD/USD is struggling to rise back above the 38.2% Fibonacci retracement level from the March-April move after prices rebounded from a fresh monthly low set overnight. If bulls manage to clear that Fib level it would open the door for a test of the psychological 0.7500 level. Alternatively, a move lower would open the path for a possible test of the rising 50-day Simple Moving Average (SMA). MACD is on the move lower toward its center line, indicating the chance for more downside. 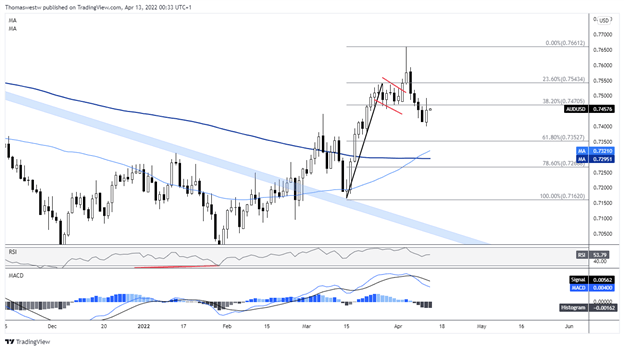